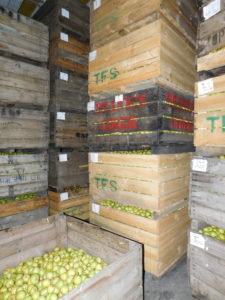 Oscar Ernest Hansen started growing pears at Highcroft near Nubeena in 1920; his grand son, Scott Hansen, runs the same orchard today, and Scott’s son Thomas has come home after his studies to work on the farm – which one day he will inherit – too. During the pear season, Scott, Liina and Thomas employ twelve pickers and ten packers – mostly locals – to pick the fruit at just the right time and ensure that it is in optimum condition when it reaches the customer. Unlike apples, pears are best eaten after a period of ageing, and each variety grown at the orchard – Packham, Winter Cole, Beurre Bosc, Spring Dew, Josephine and Comice – have their own optimum picking and ageing times. The pick of the pears are individually wrapped in tissue paper (pears will mark each other when they rub together) and boxed up in cartons for sale, but even the third grade fruit finds a home in local ciders such as Franks, Lost Pippin and Willie Smiths products. 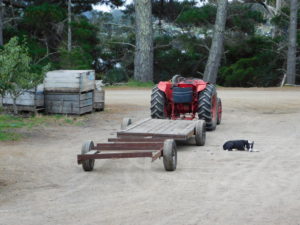 Most of Scott’s pears go to Woolworths and other Tasmanian retailers – although often only labelled on the shelf as “Australian pears” – but he’s investigating options for getting fruit back to the Sydney markets, and wife Liina manages a roadside stall at the packing shed selling their pears along with other local produce (including some from Grown for Taste!) and is hatching a plan to start up an on-site cafe. Thomas prefers a Packham’s Triumph for the crunch, but Scott’s favourite pear is the Doyenné du Comice, which after a week or so at room temperature develops a rich, sweet flavour with soft, juicy flesh.