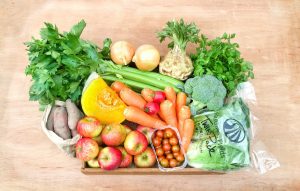 Chilli, while often associated with the food of Asia, was a staple diet of the native people of the Americas, and as such was cultivated to thrive in different climates. The rocoto chillies in this week’s boxes are a variety that thrives in cool climates because they were originally cultivated in the mountainous areas of South America. For this reason they’ve become quite popular with home growers in Tasmania, and this week’s chillies are from home-grower Justin, who has a healthy and happy rocoto bush in his Glenorchy backyard.

Potatoes, of course, are an import from the Americas too, where hundreds of varieties were developed by the creative locals – whilst so much of the production of potatoes in the west now concentrates on a small handful of varieties, our grower John – who is actually chilli-grower John’s cousin – has well over 20 varieties that he grows each year, one of many reasons we love buying from him! This week he’s supplied Red Foo potatoes, that are a rich red colour all the way through.