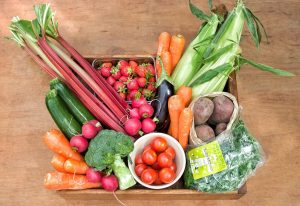 The north-west of Tasmania has some distinct advantages for farming – rich volcanic soils, a moderate but warm climate – and as is often the case, infrastructure like freight depots and irrigation schemes tend to get built around these areas, compounding the advantages. However, this week’s box is actually a pretty balanced snapshot of a whole range of farming regions across the state. Even better, we’ve been lucky enough now to visit every single grower whose produce features in this week’s box!

From the fertile north-west this week we have bunched carrots, radish, cherry tomatoes and celery from Dendra Market Gardens in Cuprona on the north coast, beans from Harvest Moon (who have pockets of land across the whole region), carrots (ordinary and Chantenay), rhubarb and broccoli from Premium Fresh in Forth, and garlic from Old School Farm further inland at Preston – who actually borrow Premium Fresh’s onion drying facilities for their garlic! Avoland Avocados are just north of Old School Farm in North Motton, and Elphin Grove grow their delicious sweet corn on their family land at Sassafras, on the eastern edges of the region.

York Town Organics are on the banks of the Tamar River, near the site of an abandoned early settlement – ironically the flooding that the area was prone to has created a patch of quite fertile ground – and represent the centre-north strongly with certified organic eggplant, zucchini, mizuna and salad mix, while tasty new-season onions come from Moore’s Farm Fresh in the oft-overlooked but highly productive land around Scottsdale.

The Huon Valley is also well represented, with plums and apples from Lucaston Park Orchards, and further south towards the old port town of Cygnet there’s strawberries from DM Jennings & Sons, and still further south in Lymington John has dug Cranberry Red potatoes and Tru Blu are still picking their sweet blueberries.

Whilst it’s not generally looked on as a farming area, the Tasman peninsula has been cultivated for many years, partly due to its history as a penal colony. Grown for Taste are definitely not convicts, but grow criminally good vegetables – this week they’ve supplied baby fennel, baby kale, heirloom tomatoes, cucumber and colourful chard bunches. And last but not least the backyards of Glenorchy, definitely overlooked but also the source of home-grower Justin’s Simone plums (he’ll also have more rocoto chillies coming up!) 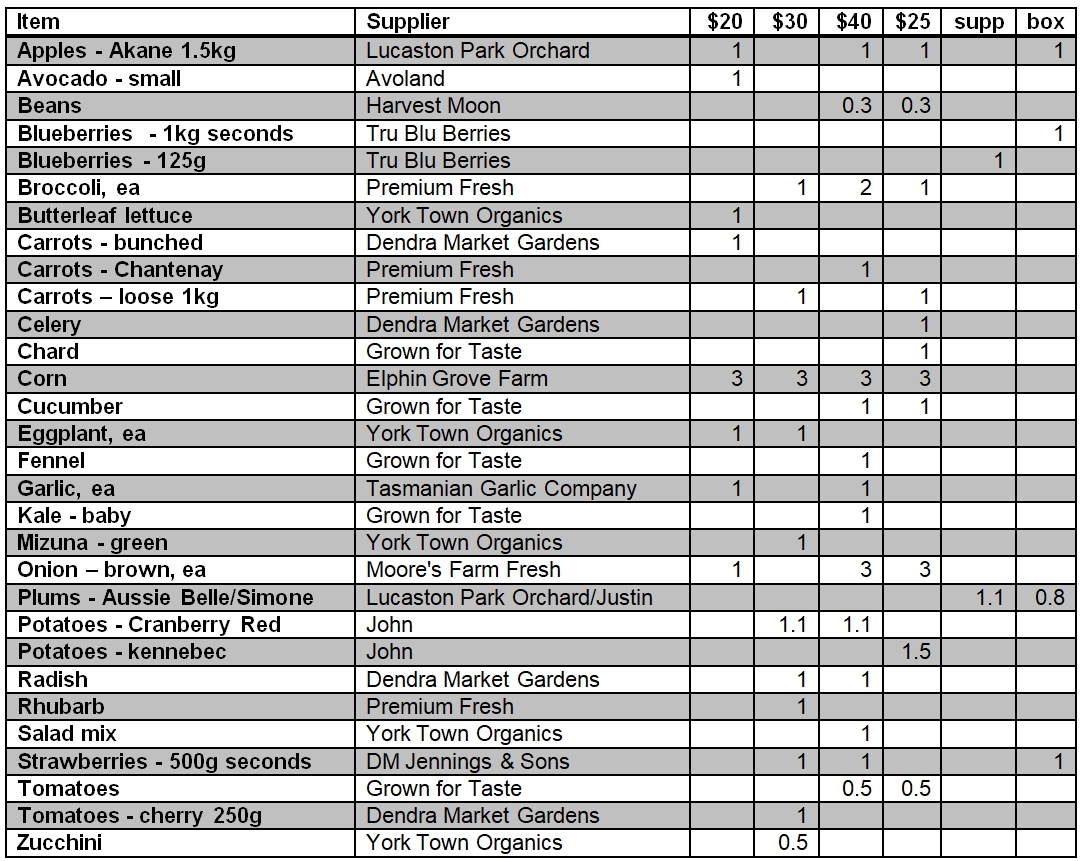