In southern Tasmania the spring potato of choice is the Pink Eye – it’s hard to find much information about its origins, but it appears to be a locally developed variety that is better suited to the generally poorer soils of the south, and famously thrives in the sandy soils around the South Arm peninsula. It’s apparently also known as “Southern Gold” – a name which is never actually used, but I suspect it’s the original name that was dropped as the more descriptive “pink eye” was probably used by locals; “pink eye” is also a name for a potato disease, so it seems unlikely that whoever originally cultivated it would have chosen this as a name. However, in richer soils of the north, where potatoes have been cultivated commercially for longer, the Bismark is generally the preferred spring potato – when small, both are waxy and are well suited to the same applications, the primary differences being the colour of the insides and the eyes (Pink Eyes are golden with pink eyes, Bismarks are white with purple eyes). Increasingly growers in the north are also growing Pink Eye potatoes, although I’ve never heard of any Southern growers growing early Bismarks – perhaps because vegetable growers in the south are commonly smaller, less diversified and less directly plugged into mainland and larger Tasmanian markets. This week’s Bismarks and Pink Eyes are both from Yum Tasmanian – a substantial agricultural operation in the north-east that supplies most of the potatoes sold in Coles & Woolworths in Tasmania, who have also diversified into pumpkin and broccoli and have recently bought into Perfecta Fresh, a large north-west based grower who specialise in onions and cherries. (Onions and cherries seem an odd combination – however it’s a logical one as they’re two of the highest grossing exports in Tasmanian agriculture.) 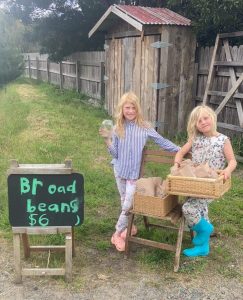 This week’s $40 boxes include broad beans from Valleyfield Farm – a small-medium mixed crop and livestock farm that mainly specialises in raspberries and blackcurrants, but at this time of the year if you drive along Glen Huon Road you’ll find a sign out offering freshly picked broad beans! Marshall & Meredith opt for a very sustainable and ethical approach to what they grow and produce, and like a growing number of farms offer a great insight into what goes into producing your food through their social media presence, a trend which I think is an excellent antidote to the large supermarkets’ general tendency to try and protect consumers from the realities of farming and hide the identities of the growers producing them through the use of generic branded packaging and labels. 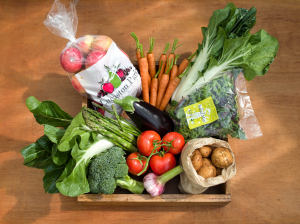 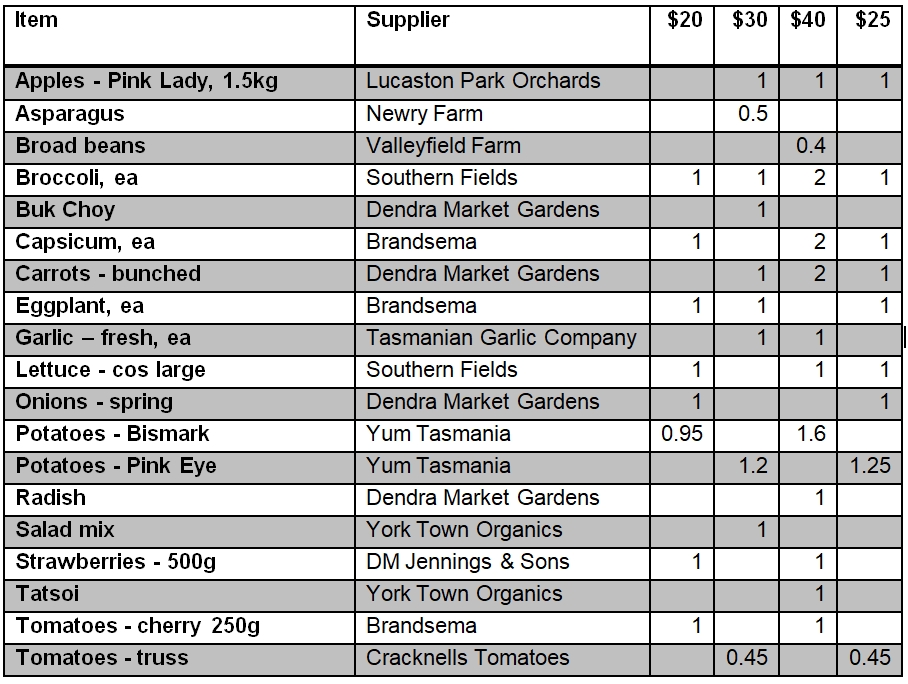