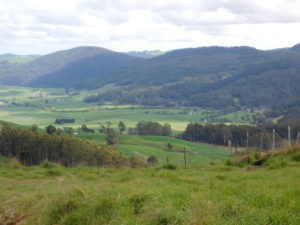 David and Kaori moved to Tasmania 10 years ago from Queensland, and after a number of years farming on their Preston property (originally a beef operation) have settled upon a unique business model – they lease land to grow a large commercial garlic crop under the Tasmanian Garlic Company brand (last year they produced over 40 tonnes), but also grow mixed crops, mainly for direct sale at local markets like Harvest Launceston and the Cradle Coast Farmers Market, under the Old School Farm banner. Rather than employing farm workers, the pair enters into partnerships with other would-be farmers, giving them the opportunity to share in the work, costs and rewards, but also reducing the large initial outlay required to secure equipment which they’ve gradually amassed over their time farming in the area. Appropriately, considering David and Kaori’s real interest in fostering and supporting new farmers, their home on the farm is actually the old Preston school-house, which during the season they share

with a range of business partners and WWOOFers.

David has a pragmatic but sustainable approach to farming, borrowing techniques and principles from both conventional and organic farming with a real focus on soil health, strictly limiting tillage and keeping traffic to set areas to minimise soil compaction. Old School Farm concentrates on growing different varieties to the majority of local commodity growers, and are moving into propagating their own seedlings, although they do also routinely buy transplants from Hills Hydroponics, another BB supplier. Local giant Premium Fresh, who are one of the biggest growers of onions in the country, support the Tasmanian Garlic Company by giving access to their onion drying facility, which due to the garlic harvest coming a month or so prior to onions in the seasonal calendar ensures this equipment is being fully utilised. 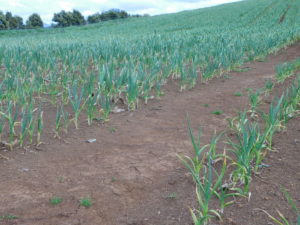 Kaori brings her Japanese heritage into the family business, running a Japanese food stall and making traditional Kim Chi using their cabbages; she also takes pride in applying the principles of Ikebana (traditional flower arranging) to setting up their regular market stalls, both in how produce is bunched and in the approach to laying out the stall. David often jokes that he should set up his own stall next-door called “Dave’s dirty veg”; his focus is far more on the day to day running of the farm than making things pretty!