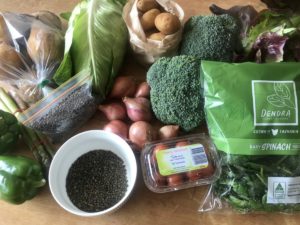 This week’s box straddles the change in season, with one foot in the winter camp and one in summer. We say farewell to celeriac and pears, both of which will not be included in boxes until next season; but say hello to Brandsema capsicum, which would definitely pair well with the cherry tomatoes and green lentils in a French-style braise. Green capsicum is not a different variety to yellow or red capsicums, by the way – it’s just the unripe fruit, which if left on the plant for long enough in the right conditions will turn to the ripened colour. Red and yellow capsicums will become available in the next few weeks.

Root vegetables, a winter staple, are only represented with celeriac and new-season Dutch Creams from Dendra Market Gardens this week; both broccoli and cabbage are in though, with $40 boxes receiving pointed or “sweetheart” cabbage from Grown for Taste, a variety that is sweeter than other varieties and is best suited to cooking. Grown for Taste have also supplied 200 beautiful Skyphos lettuce, enough to share around the $30, $40 and $25 boxes, along with some tender baby leeks, harvested before maturity partly to clear out space for a planting of Brussels sprouts for the winter, exciting news! Young, tender silverbeet makes an appearance in both $20 and $40 boxes from Grown for Taste and York Town Organics respectively; $30 boxes get a bag of Dendra’s new baby spinach instead. 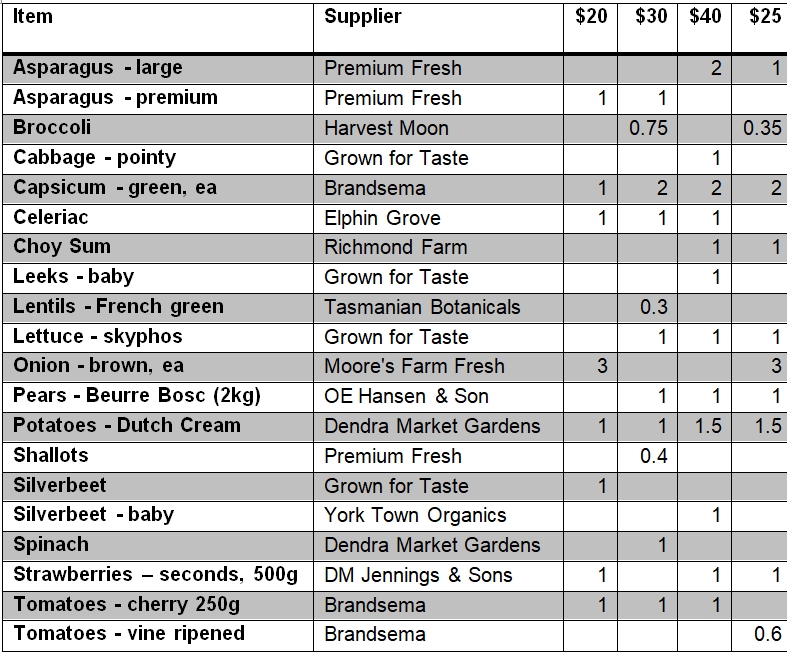