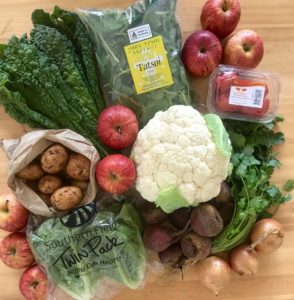 Potatoes, despite being such a ubiquitous part of most people’s diets, are a seasonal vegetable; and even more so considering that they’re one of a small list of vegetables that are strictly prohibited from being brought into Tasmania due to bio-security risks. Potatoes do grow during winter, but much more slowly – most potatoes are grown to harvest between spring and summer, and much of what is sold locally during winter and spring are potatoes that have been dug and stored for sale as required. Some growers use cool-storage for potatoes, which has the advantage of stopping potatoes from sprouting but has the disadvantage of turning some of the starches into sugars; for this reason local processors like Simplot and McCains only process potatoes for chips that haven’t been cool-stored, as the extra sugars result in browning when they’re fried. Our regular potato grower John takes a different tack – potatoes are stored in wooden bins covered over with blankets to keep the light out (this is very important as light causes potatoes to turn green – the disadvantage is that the shoots need to be knocked off to keep the potatoes fresh but the advantage is they taste more like potatoes!

Either way, come spring the quality of stored potatoes starts to deteriorate – as a result every year potato-lovers go into a mad frenzy over “new potatoes” and gladly hand over fat wads of cash for them, as the quality of the freshly dug potatoes is so noticeably better than the quality of the stored ones. In the south of Tasmania growers have tended to focus on pink eyes, which are certainly delicious, but at the risk of being sacrilegious, the fact that they’re “new” is probably a bigger factor than the specific variety. Not all varieties are suited to planting in winter for spring harvest, but this week we’re glad to include the northern “new” potato, the Bismark, in all boxes – which we reckon are just as good as a pink eye – which were freshly dug this week at Dendra Market Gardens in Cuprona. (Interestingly, there seems to be a growing trend for northern growers to grow pink eyes, probably due to the prices they can fetch in the southern market…) 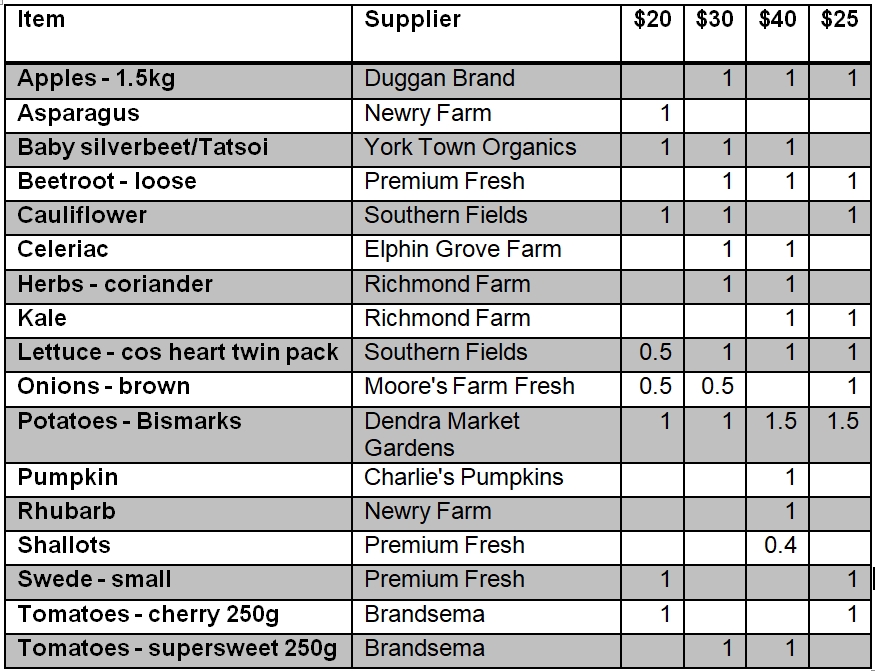