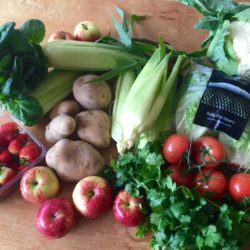 This week’s box has a distinctly southern flavour – as I noticed yesterday when all I had to pick up from the SRT freight depot was a bin full of almost 1000 ears of corn… with the fruit-fly exclusion zone still in place, getting any fruit down from the north of the state is still an issue; but for those of you who love the little green fruit, we’ve been lucky to find a home-grower in Howden who inherited a grove of around a dozen feijoa trees from a previous owner of the kiwi persuasion. Feijoas are quite unique, with a strong perfume and a complex flavour more reminiscent of tropical fruit than anything that normally grows in a temperate climate – which is probably why they’re dubbed pineapple-guava in some circles. The whole thing is edible (apart from the skin), and the easiest way to eat it is to cut it in half and scoop out the soft flesh and jelly-like seeds with a spoon. You’ll find they become sweeter as they soften up, so time your eating accordingly! They also cook well, imparting their strong unique flavour and maintaining their texture – feijoa and apple crumble?

To the west, Kylie’s great swedes are back on the menu too from Mt Lloyd, and from even further west at Maydena, Nick has dug a few bags of brake light potatoes – a great general purpose potato with red skin and white flesh – for this week’s budget boxes; Matt Cracknell’s truss tomatoes also still have a month or two before they stop fruiting in their toasty-warm glasshouse. The Coal Valley region – which unlike most of the south has rich, fertile soil – is well represented with delicious spring onions, tatsoi and coriander from Richmond Farm, as well as fresh cauliflowers and crispy cos hearts from Southern Fields. From the Huon Valley John’s potatoes feature (this week’s up-to-dates are an ideal roasting potato) along with the Duggan’s certified organic apples and delicious cygnet strawberries from David Jennings. 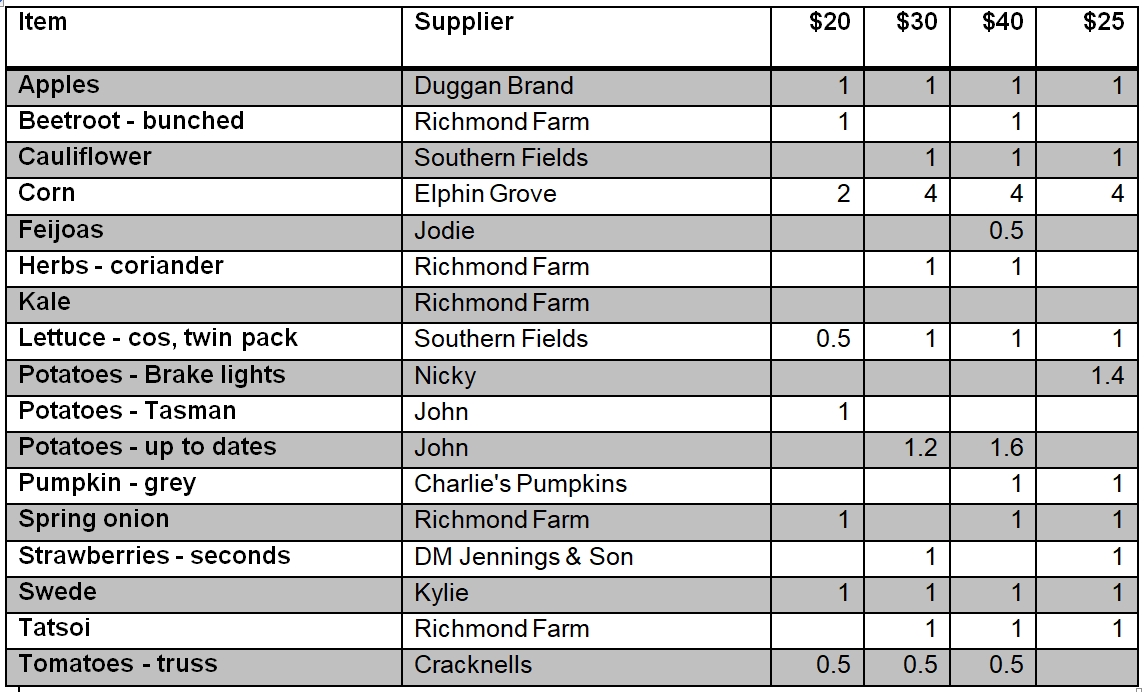