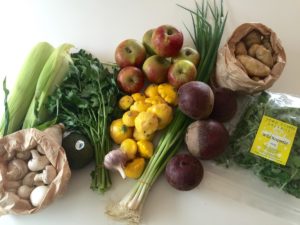 The apples included in this week’s box are Cox’s Orange Pippin, an old variety dating back to 1830, which Mark & Christine only grow in small quantity (i.e. no more than a few tonnes…) because it’s not a great keeper. However, in my personal opinion it’s almost certainly the king of apples – the perfect combination of crunch, acidity and sweetness – and one to really savour during its short season. 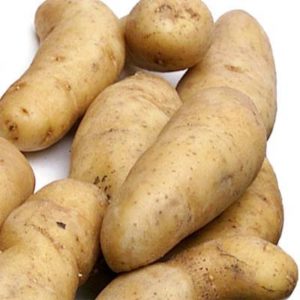 $30 and $40 boxes feature Russian Banana potatoes – a moderately common fingerling potato that’s often overlooked for the more commonplace Kipfler. Fingerling varieties are harder to grow and more importantly to dig, which accounts for their higher price, and are generally a fairly firm or waxy potato that will hold up fairly well when boiled (especially when boiled whole) but are also great for roasting. No need to peel – just scrub and if they’re small you don’t even need to get out the knife!

$40 boxes get a couple more rare varieties – both the stubby but ideally suited for eating whole Chantenay carrot, and baby corn from Elphin Grove. Baby corn is not just immature corn, it’s actually a separate variety, bred to be tender enough in the core to eat whole. 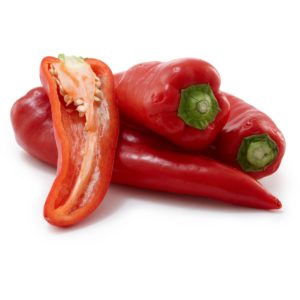 Many of the Grown for Taste capsicums included in the $40 boxes this week are the elongated bullhorn variety – but for something even rarer, this week’s budget boxes get one of George & Hilary’s delicious rockmelons, grow in their custom raised-bed polytunnel system.

$30 boxes include half a kilo of yellow button squash from Richmond Farm – zucchini’s frilly cousin – and fruit supplements feature a handful of Howard’s Sun plums from the Canes in Franklin, which sadly marks the end of the stonefruit season for this year. 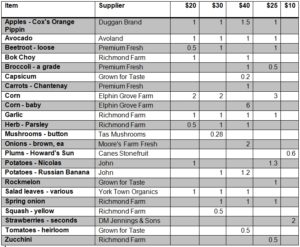