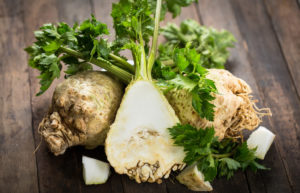 This week we welcome back a root vegetable that isn’t a regular in Australian’s shopping trolleys, but we think should be: celeriac! Celeriac has been eaten since ancient times (it appears in Homer’s Odyssey) and is common in many European countries, particularly in those that have a longer winter than summer as despite most of the growth taking place in late summer, it quite happily overwinters and also stores very well when refrigerated. However, the Elphin Grove celeriac in this week’s box are freshly dug this week, and are a totally different beast to the desiccated, hollow bulbs often found in shops. Celeriac has two very distinct personalities – roasted or boiled and pureed it has a rich, unctuous texture, slightly looser than potato; but it can also be eaten raw as a crisp addition to a salad (and in this usage it would be nice in combination with this week’s radishes!). Either way, before preparing use a sharp knife to slice off the gnarly outside of the root. Here are some of our recipes, and a few from SBS food, to get you started. 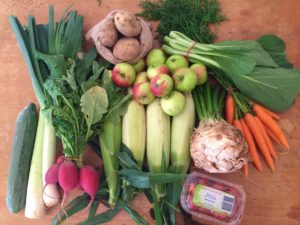 As Autumn approaches, the shift in season is starting to be reflected in what we’re sourcing for our boxes – this week leeks make a return, along with Lady in the Snow apples (a small variety, perfect lunchbox size, that are only really available around this time of the year as they aren’t suited for long-term cold-storage), autumn raspberries, pears and red onions. There’s still plenty of tasty summer treats though – capsicum and cherry tomatoes from Brandsema, heirloom tomatoes and melons (no, really!) from Grown for Taste, and delicious sweet corn from Elphin Grove (which just like asparagus in spring, we’re making the most of while the short season lasts). 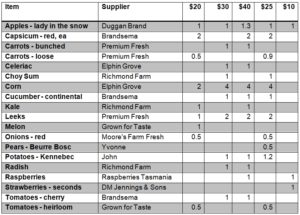