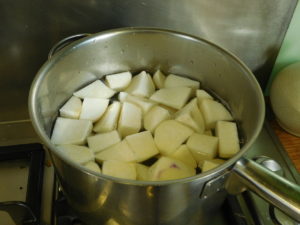 Top and tail and peel 1kg of turnips and roughly chop. Put in plenty of boiling water with a tsp of salt to cook – the salt water will draw out the bitterness.

Meanwhile, combine half a kg of good quality pork mince with about a half tbsp each of dark soy and fish sauce, a tbsp each of brown sugar and honey, and minced garlic, lemongrass and sriracha sauce to taste. 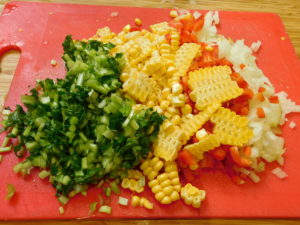 Meanwhile, cut the leaf off a bunch of tatsoi – leave the rubber band on and this is a one-chop job – and put the tops in a steamer and the bottoms in a sink full of water. Give the bottoms a good swish and rinse to remove any dirt. Strip the kernels off two corn cobs, then dice an onion, a capsicum and the tatsoi bottoms to roughly the same size as the corn kernels. 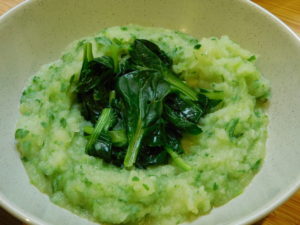 When the turnips are nearing al dente (a little bit in the texture is a positive), put the tatsoi over them to steam, and add the diced onion to a hot oiled wok, then add the mince and get to work breaking it up with a wok shovel. When it’s mostly seperated and parcooked, add the other veg, and continue cooking until done, then thicken a little with a cornflour slurry. Keep an eye on the tatsoi while you’re cooking the pork – it should only take a minute or so to cook, so remove it when it’s wilted and put some ice on to stop it from continuing to cook. 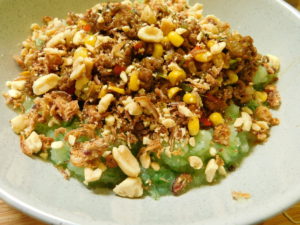 Cover the wok to keep the cooked pork warm, then drain the cooked turnips. To get a green mash like the picture, I first blitzed half a bunch of spring onions in the food processor, then added the turnips with about half a tsp of salt (trust me on this one…) and blitzed until the turnips were well mashed. Alternatively, blitz the turnips (still with the extra salt) and add chopped spring onions for a more colcannony-style mash. Dish the mash into bowls, push the mash to the sides to make a hollow in the middle, and put the steamed tatsoi in the hollow.  Top with the cooked pork mix, along with crushed peanuts and crispy-fried shallots.