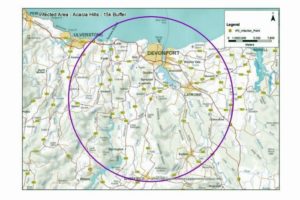 Sadly, this week biosecurity in Tasmania have confirmed the presence of adult fruit flies in locations at Spreyton and Flinders Island. Whilst having a damaging pest in our state that up until now has been able to be kept out may have some impact upon future fruit harvests, the consequences of what was probably caused by infected fruit or plants being brought into the state will be wide-ranging. Currently, all fruit leaving the isolation zone around Spreyton in the North West (which impacts on some very large berry growing operations and also hydroponic tomato and capsicum growers like Brandsema and Tassie Pride) must be assessed by biosecurity one consignment at a time before it is cleared to leave the area – all consignments checked will also have associated paperwork to be kept by the grower, the freighter and the receiver, and failure to produce this paperwork will incur heavy fines. Some farms may have to destroy stock or plants and trees, but even those who don’t will have a significantly increased workload if they’re to continue to operate, and may also lose sales as a result. Tasmania’s multi-million dollar cherry industry also stands to lose big – Lucaston Park, who supplied the cherries in this week’s box, have had fruit rejected by Taiwan, 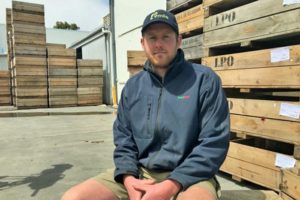 one of their biggest export markets, until they can produce paperwork that shows that they aren’t in the exclusion zone; which is theoretically easy enough, but any fruit being shipped out for export needs to leave from a port that is right in the middle of the exclusion zone!

We wish biosecurity the best of luck in their efforts to eradicate the fruit fly in Tasmania before it can take hold, and we’re glad we can support local growers like Lucaston Park and Brandsema in the meanwhile by selling you their beautiful produce.

When we were planning the box on Sunday and Monday, the status of freight from the fertile north-west of Tasmania was a little unclear, so as a result much of this week’s produce is from the south of the state – not a bad thing! 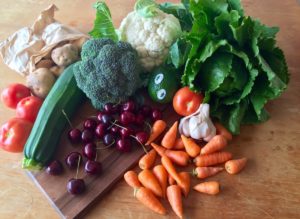 Apricots from Campania, Blueberries from Lymington (Tru Blu have a double blow, as they also have to deal with paperwork relating to the ongoing saga of blueberry rust every time they send fruit interstate), cherries from Lucaston, and beautiful peaches from Franklin – along with other great southern delicacies like garlic from Cygnet (for both organic and standard boxes), tomatoes from Granton and Saltwater River, and some whopping great cos lettuce from Forcett. (Getting all this in, packed, and out within a two day period is quite a ballet!)

(In case you were wondering, by the way, avocados are subject to the fruit fly quarantine if they’re ripe, but not if they’re green. As the Avoland avocados are shipped within a day or two or picking, thankfully there’s no quarantine requirements for freighting them outside of the exclusion zone. Don’t forget to leave your avocado out on the bench to ripen – a bit of sun won’t do it any harm – but whatever you do, don’t put it in the fridge until it’s fully ripe.) 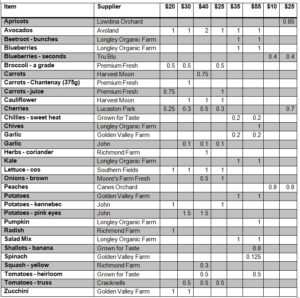