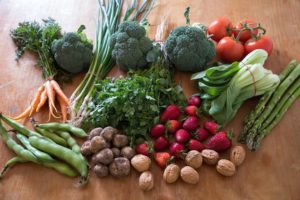 How about this weather! It’s hard to argue that climate change isn’t a thing with the almost constant disruptions to normal seasonal weather, and leaving aside the fact that eating local actually reduces the emissions produced by freighting produce around (made even better when your box is delivered by our highly optimised and efficient delivery routes), unpredictable weather patterns are putting great pressure on farmers across the country. The current pattern of hot weather followed by heavy rain is a serious issue for fruit farmers – we’ve got our fingers crossed for stone-fruit producers who can face heavy losses in these conditions, but speaking to David Jennings on Wednesday when dropping off the empty trays from last week’s order, I was pretty gobsmacked to be told that in the previous hot-wet cycle a week or so ago he had lost about 14 tonnes of berries. We love DM Jennings’ seconds packs because they’re great value (we’re offering them to you in your boxes at effectively just a smidge over $5/kg at the moment), but for a farmer growing on such huge scale for the big supermarkets, having an outlet for fruit that doesn’t meet specs, especially in a week like this where the plants are still recovering from some fairly hostile weather and likely less than half of the berries will make premium grade, means paying pickers without operating at a loss. 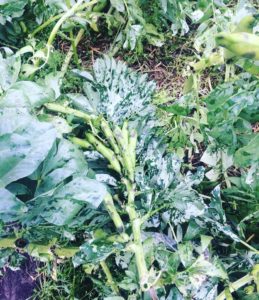 John – our potato grower – is about ten minutes away from David’s strawberry farm, and could really do with some rain to get our Christmas potatoes up to size, but frustratingly with much of the rain coming in sudden storms, the rain-fall is quite localised and hasn’t really reached his Lymington valley (although not before he gets the hay in next week!) It’s a similar story at Grown for Taste – whose salad mix we’re pleased to include in this week’s box after quite a gap in availability – who are pretty desperately hoping for a decent flush of rain to fill their dams as with no other options for irrigation at Saltwater River (clue’s in the name…), if the dams do run dry then the thirsty crops will end up as compost. An hour away by road (but probably half an hour by boat), the Bream Creek Community Market Garden had their allotment pretty much flattened (see picture to the left) by a flash hail-storm not long after we sent out their beautiful spring garlic last week – we were glad we were able to buy some of what was left of their produce this week for our organic boxes, and also supply some local produce from our network of growers to keep their roadside and market stalls stocked while the garden recovers.

Farmers are often characterised as a bit slow and quaint, but in my experience, they’re generally passionate about what they do, extraordinarily resilient, and very resourceful and innovative, as well as being extremely knowledgeable in their field (pun not intended). Spare a thought for the toil they do in all sorts of weather – and sometimes in spite of the weather – that’s hidden behind the pretty displays in the shops and markets or in your neatly packed weekly box of bounty! 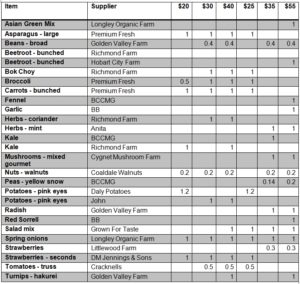