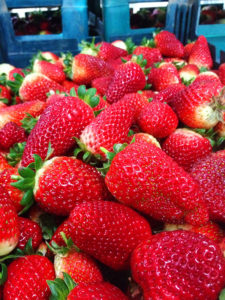 STRAWBERRIES! As great as apples and pears are, there’s always a bit of excitement when berries start – and the first berry (it’s actually not a berry, but I digress) is always the strawberry. We’re lucky in the south of this beautiful state to have the largest Tasmanian strawberry grower, in DM Jennings & Sons – and we’re even luckier that despite the sheer volume of fruit they produce at their peak, there’s no compromise in terms of flavour! David Jennings & family started their farm at Slab Road in Cygnet in 1983, and as their strawberry fields have grown to take over more and more land in the area, the packing shed remains on the original site, where fruit is graded, packed and delivered fresh up to the city every day at the peak of the season. The fruit that David sells to the large retailers has to meet quite exacting specs, which means that we’re often able to access very high quality strawberries for a lower price, which means more berries for your tummy… and of course it also means that the “seconds” don’t go to waste. What’s more, if there’s fruit that isn’t suitable for sale as seconds (often because of weather damage that makes it more perishable), it ends up in your Huon Valley Juice Company strawberry & apple juice. We’ll be including strawberries every week until December when cherries start, but if you really love your strawbs, we can offer 4kg trays of seconds for $24 – that’s $6/kg – as an add-on with your box order or just as a stand-alone order. 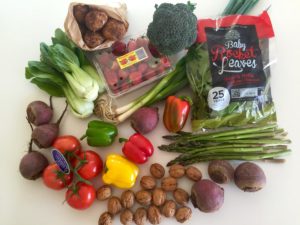 Spring is also the season – although this is oft forgotten – for potatoes. Whilst new season’s roasters like King Edwards and Up to Dates won’t be around until closer to Christmas, early varieties start poking their heads up from October, or even September in parts of the state with favourable weather conditions. The south of Tasmania is besotted with the creamy-fleshed, pink-spotted pink eye, but this week, for a change, we’re including the northern equivalent – the Bismarck! $20 & $30 boxes have a feed of this white-fleshed and purple-spotted potato, which in all other respects does exactly the same jobs as a pink eye – scrub the dirt off the flaky skin, boil it up (not too hard), and either slather it in butter or make it into a potato salad. We had a sneak peek tonight in a potato and chick-pea curry, and whilst I’m not abandoning the potato of my country-men, they’re definitely delicious, and have a great solid, meaty texture like a pink eye. We hope you enjoy this exotic little treat from our northern cousins. 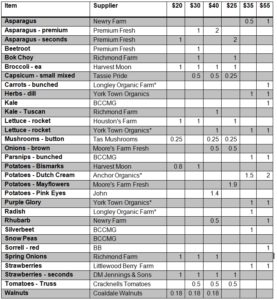