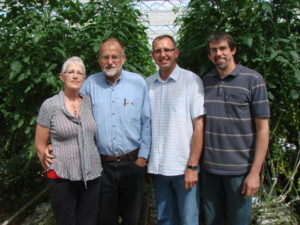 After a difficult season last year, the Brandsema family decided to diversify what they grow at their Turners Beach glasshouse – when I contacted them to order some of their delicious cherry tomatoes for this week’s boxes, they asked if I’d like some eggplants… well duh! Strangely, despite the fact that they grow well in the same hydroponic conditions as tomatoes, capsicums and cucumbers, eggplants are rarely grown in Tasmania, so we’re very excited that we might have a more regular supply of this delicious and versatile vegetable. Only $40 boxes get a taste this week, but there are also delicious green cucumbers for $30s, $40s and $25s, and cherry tomatoes across the board. 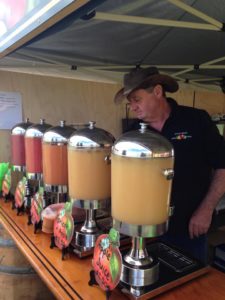 Sadly, Mark & Christine Duggan also had a poor apple season earlier in the year – yields were down by quite a few tonnes – and the fruit has also not stored as well due to weather conditions during picking, which means that sadly this will be the last week we have any of their delicious apples in boxes until the new season fruit comes through next year. However, thanks to Mark’s forward thinking and persistence in starting up their own in-house juice brand (Huon Valley Juice Company), they’re able to value-add much of the fruit that would otherwise need to be sold at below-cost to cider producers and the like. If you haven’t tried their delicious juice, there will be plenty available to try in the coming weeks!

Organic boxes this week feature goodies from the BB backyard – Mrs BB hosted a group from a garden group last weekend, and with that out of the way was ready to harvest the bounty! In addition to rhubarb, $55 boxes have a bunch of Warrigal greens, which are a native species that is actually quite easy to grow – so it’s quite odd not many people grow it! To prepare them for eating, pick the leaves from the stems (the little buds aren’t good eating, so discard them!) and briefly boil them in plenty of water, as they contain high concentrations of oxalic acid. The leaves are hardy, so won’t suffer from this treatment – drain them after boiling for a few minutes and they’re ready to use, either added to salads or in cooked applications. 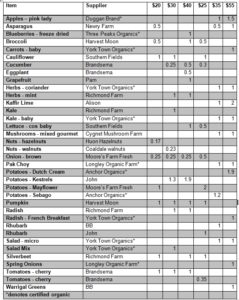