This week’s box is really a study in early spring eating, with very few root vegetables and a lot of leafies (some of which even include spring florets)! Before the advent of controlled atmosphere chilled storage for pomes (the generic word describing apples, pears, quinces and the like), the quality of fruit picked in the late summer and early autumn would deteriorate much more quickly – storing them in barrels filled with water, which led to the traditional game of bobbing for apples, kept them at a steady cool temperature with little exposure to oxygen, but by spring apples and pears would have been either eaten, bottled, or be rather shrivelled and possibly more of a necessity than a pleasure! Winter and spring in the seasonal calendar are the hardest times of the year to satisfy the basic human demand for sweet things, which is where honey (which will pretty much last forever), and later sugar (and thus jam) became such sought after commodities. This week’s $40 boxes feature a unique BB jam-marmalade hybrid – Tassie rhubarb is combined with orange peel (for pectin AND flavour!), fresh ginger and cardamom seed.

The truth is, however, that seasonal eating isn’t the only reason that this week’s boxes don’t contain any fruit. Getting away from the farm is tough, no matter what you grow – Mark & Christine Duggan, after much planning, are heading off to the U.K. for a well-earned holiday for a few weeks at what’s a relatively quiet time of the year in apple & pear terms. We feel strongly about loyalty to the growers that look after us (and you), so we’ll be giving you a bit of a break from apples in the interim, trying out a few other things in the mean-time as a change. 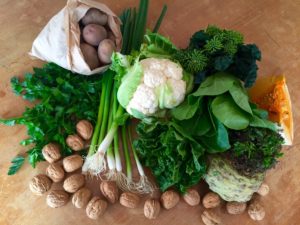 Meanwhile, Matt & Ruth from Elphin Grove have recently returned from a deserved family holiday after a difficult corn season – straight into planting peas and poppies, before lamb season hits! (The Elphin Grove facebook page is a great insight into the realities of farming life in Tasmania, by the way.) Just to make things even more busy for them, we’ve ordered over 200 celeriac for you to enjoy in your boxes this week, one of the few root vegetables that are locally available at this time of year – the others being swede, beetroot and turnip.

Whilst it’s still a relatively lean time right now, we’re looking forward to a start on asparagus and tomatoes in the next few weeks, and capsicums, cucumbers and strawberries shouldn’t be too far behind! 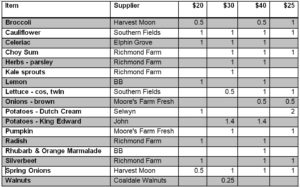