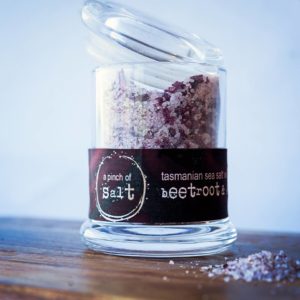 Mrs BB and I went to Launceston for a night away a few weeks ago, and left early on Saturday morning to make sure we could have a bit of a wander around Harvest Launceston, the local Farmers’ market – refreshing some existing relationships with growers, and having a look around for new producers too. Doing the loop we stumbled across A Pinch Of, and after a couple of tasters were very impressed with how much flavour Robyn packed into her flavoured salt, as well as her ethos prioritising local ingredients. The salts are made using locally sourced Tasman Sea Salt (which we’ve been stocking for a few months now), but are enriched with a whole range of locally sourced ingredients, creating a range of great all-in-one seasonings. After a few weeks to-and-fro we’re very pleased to give you a taste of a few of our favourites that we tasted on the day! $20, $30 and $40 boxes each receive a random selection of 30g of one of the following A Pinch Of salts: beetroot & horseradish; native pepperberry; chilli-lime; kaffir-lime, ginger & chilli; and slow-roasted garlic. With a record number of boxes going out this week (260!) we didn’t have time to label the bags; a sniff will probably tell you which of the above is which though, and colour is also a giveaway (the beetroot is a reddish purple and has small shards of dried beetroot where the pepperberry salt looks a little 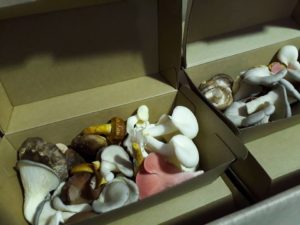 more like ground up amethyst crystals; the garlic salt is mostly white with some sepia flecks; the two chilli salts have flecks of green and red.) We hope you enjoy them as much as we have – we’re also hoping to stock some of these lines as optional box add-ons!

We’re also really pleased to be able to include mixed gourmet mushroom punnets from Cygnet Mushroom Farm in this week’s boxes – an order of 180 punnets is something we’ve had to plan in advance, as they have been grown to order just for you. Bec – owner of Cygnet Mushrooms – made the trip up first thing this morning to deliver the order, having to make a last-minute detour due to snow on Vince’s Saddle (ah – Tassie Spring…), so they’re some serious fresh fungi! 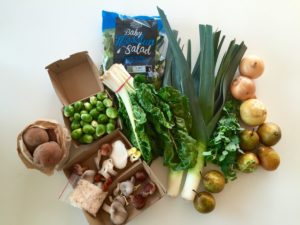 This week’s Brownell potatoes are a moderately waxy variety with white flesh, suited to boiling and mashing; the Mayflowers in $25 boxes are more floury and suited to roasting and baking. The grain the $40 boxes is organic spelt from Kindred Organics – as this spelt isn’t pearled, it requires a longer cooking time, and is ideal for adding to soups and stews, but can also be cooked in a similar way to brown rice to use as an ingredient in salads. This week’s herb – oregano – is great for Mediterranean dishes, but also retains much of its flavour and aroma when dried, which we’ll definitely be doing with the few extra bunches we ordered; a recent Choice investigation revealed most commercial packaged dry oregano is largely made up of just about anything but oregano! 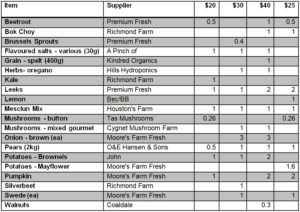