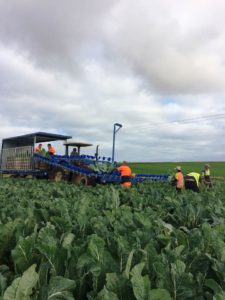 Much of Tasmania’s food agriculture is based in the north of the state; unlike the generally poorer soils in the south, soils in the north are mineral-rich ferresols that are well-suited for growing vegetables. Much of this week’s box comes from growers in this region. Premium Fresh – in Forth – grown onions and carrots on huge scale, as the climate in Tasmania is well suited to these crops, but this week we’re featuring a number of their smaller, specialty lines: beetroot, Brussels sprouts, turnips, and shallots. Shallots are in the same family as onions and garlic, but are much sweeter and milder than brown or red onions; whilst they can be a bit fiddly to peel and chop, they’re really versatile. Roasted or braised whole, they’re jammy and sweet; finely chopped they make a great addition to vinaigrettes and a traditional sauce béarnaise; and in Asian cookery when they’re not used as a base for curry pastes they’re also enjoyed finely sliced and fried until crisp as a wonderful textural component to many dishes. 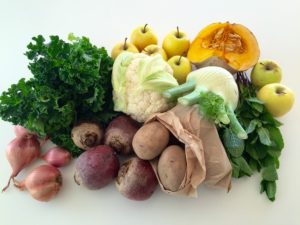 Harvest Moon – also in Forth – and Moore’s Farm Fresh in Scottsdale also take advantage of the rich soils in the north for their large-scale operations that operate on a mix of contracted and in-house farming; the huge volumes of produce are trucked in to a central pack-house for grading, sorting and packing ready for sale to supermarkets, wholesalers, retailers and export. This week Harvest Moon have supplied cauliflower and broccoli; this week’s pumpkin, brown onions and russet potatoes come from Moore’s Farm Fresh. Hills Hydroponics take a very different approach to their Devonport growing operation – this week’s mint (which I always associate with spring!) and kale are growing using a composite hydroponic system, fed with exactly the nutrients they need through drip-lines. However, joining the circle, Hills also grow seedlings on a large scale, many of which are supplied to the large vegetable producers in the area who have supplied much of the rest of this week’s produce. The kale from Hills in this week’s box is actually “living” kale, meaning you can do like a large-scale vegetable producer and plant it too – just leave about ten centimetres of stem from the root ball when you eat the leaves, and then chuck it in the garden! 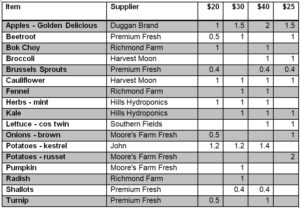