Despite the freezing cold weather, the increase in sunshine as we move past the solstice is really starting to become noticeable – almost enough to consider spending a bit more time outdoors, and certainly making the change of season feel tangibly close. Whilst we’ll still be eating mostly “wintery” veg for the next couple of months at the least, the wonders of modern technology enable some rather wonderful season-busting. Our first boxes for August have a little foretaste of summer – a bunch of living basil from Hills Hydroponics, at Don Heads looking out over Bass Strait. One of a number of huge hydroponic growing operations in the Devonport area, Stephen Hills made the switch into growing herbs on scale when the demand for the tree seedlings they’d been growing for the local forestry industry disappeared almost overnight, and now provide herbs (and other greens) for all four major supermarket chains in Tasmania (and us!). In a cold-temperate climate like Tasmania, hydroponic hot-house growing is a great way of 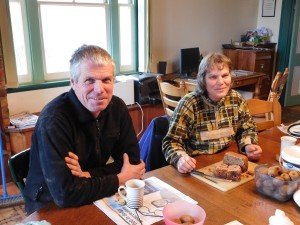 extending the proportion of the year that summer produce (like tomatoes and peppers) is available, and also reducing the hunger gap period at the very end of winter/beginning of spring where not much is available at all.

I’m already looking forward to knocking up a batch of pesto with the basil and walnuts (both in this week’s $30 & $40 boxes), with a bit of garlic and lemon for good measure, which will give a summery flavour to a potato salad using this week’s salad rose potatoes from John. But there’s plenty of hearty winter goodies in this week’s box too – broccoli, cauliflower and parsnips from Harvest Moon, kale and bok choy from Richmond Farm, and delicious Pink Lady apples from Mark & Christine. $40 boxes also have another great winter staple – whole grains, in the form of spelt, an ancient form of wheat, from Kindred Organics. Grains like spelt and barley can be “pearled” or left intact – pearling removes the outer bran layer, which has the advantage of reducing the cooking time, but also the disadvantage of reducing the fibre content. The unpearled spelt in this week’s box is ideal for adding to soups and stews, but be aware that recipes that call for pearled spelt (e.g. the infamous “speltotto”) are unlikely to end well when attempted with spelt that has not been pearled. 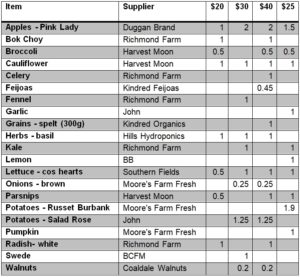