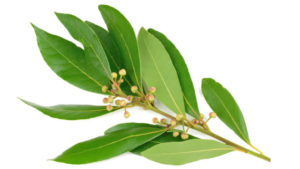 Backyard Bounty started five years ago with the idea of making preserves from the home-grown produce – especially fruit – that often goes to waste, and we’re always keen to include home-grown produce in our boxes where we can. This week we’ve managed to include produce from three separate home-growers in boxes, which could possibly be a record! Fresh bay leaves have a wonderful aroma and add a subtle but delicious note when added whole to braises and stews to infuse; they can also be dried and ground – I used to make a salt mix consisting of salt ground with dried bay leaves and lemon peel which made a delicious addition to fish in a range of contexts. Home-grower Duane has a particularly well established bay-tree that needed a trim, so we were quite happy to take some off his hands to share with you in exchange for a box of BB goodies! Our organic boxes this week include more of Bec’s lemons and Cathie’s kiwifruit; other boxes may also include some of these as substitutes.

This week’s organic box almost didn’t go ahead… but thankfully between Seven Springs Farm in Lorinna and Longley Organic Farm (and Mark & Christine who supplied the apples) we were able to put together an almost entirely certified organic box! Speaking of apples, this week’s Sundowners are one of my favourites, nice and crisp and not too sweet! John’s potato for this week is the Russet Burbank – the classic French fry potato – while the organic and budget boxes include the ever popular Dutch Cream, and the standard ($20, $30 and $40) boxes feature shallots, which have a much more refined flavour than the common brown onion and are mild enough to be often featured raw in dressings and sauces. 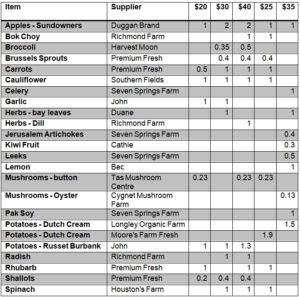