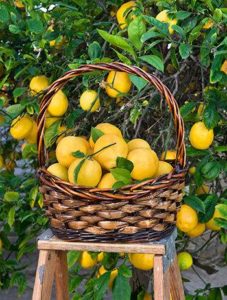 If there’s one thing I think no home garden is complete without it’s a lemon tree. Unlike many fruit, lemons will fruit at various times during the year (right now being one of them!), they need little looking after (apart from an occasional amber “watering”), and fresh lemon, both zest and juice, add so much to so many dishes. Remarkably, though, no-one seems to grow them commercially in Tasmania, despite the huge numbers of productive lemon trees in home gardens. This weeks 40 boxes have a couple of lemons each, which we’ve sourced from two home-growers – Bec and Simon – in exchange for their own vegie boxes! If you have lemons of your own that you’d like to trade in, do let us know so we can include them in some of the other box types over the coming weeks too.

Last year we bought a load of pumpkin from Charlie – pictured below, then 9 years old – who with a little bit of help was making his first foray into farming in Cressy on the family property. Unfortunately this year’s crop didn’t go quite as well, and most of the butternuts failed (a lesson in the risks of farming learned early!), but we were pleased to be able to buy at least twice Charlie’s weight in pumpkins last Saturday, some of which are included in this week’s boxes. Charlie has just started aviation lessons – a useful skill on a farm! – and is hoping to have a more successful year next year so he can put some of his earnings towards his continued flying lessons.

Cracknell’s tomatoes picked their last tomatoes for the season this week – some of which are included in this week’s boxes – but just like the other hydroponic growers around the state, that doesn’t mean holidays. All this season’s plants will need to be removed and the hot-houses cleaned up ready for putting in next year’s plants (which were planted last week in the nursery) – these will then need to be carefully looked after to ensure that they’re ready to go in spring. Local carrots – often thought of as a year-round commodity but actually quite seasonal – will mostly finish up in the next few weeks; all boxes this week include a good feed of carrots, and we’ll be sure to include them until they’re no longer available. Sadly our preferred swede grower – Kylie from Mt Lloyd – has had problems with the crop this year, but we hope to still be able to include local swede, turnip and beetroot over the winter, and local parsnips should also be available for a month or so after carrots finish. 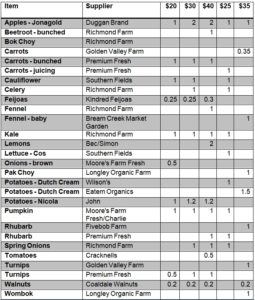