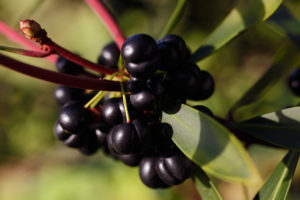 Whilst we fill boxes every week with locally grown produce, it’s actually not that common that we’re able to include something in the box that’s actually native to our rather special little island; which is a great shame and if anyone does decide to cultivate native species for culinary purposes please do let us know as we’d be very interested! Tasmannia lanceolata – commonly known as native pepper or Tasmanian pepperberry – is native to Australia’s south-east, and is grown locally by a number of growers including Diemen Pepper at Woodbridge. Both the leaves and the berries have a high concentration of polygodial, which in addition to providing the unique “spicy” note to the pepper (which is completely different to the kick from pepper, chilli or wasabi), is also a antimicrobial, analgesic and anti-inflammatory – little wonder that in times gone by it was also used in medicinal roles. Whilst the berries we’ve included in some boxes this week appear fairly black, they change to a vivid pink-purple colour when ground – especially when ground with salt, making a colourful and unique alternative to seasoning with salt and pepper. They can also be used whole in braises – although be careful about eating a whole berry in one go! If you’d like to get your hands on some of this unique native spice, don’t forget we’re also offering it as an optional add-on – 30g (double what’s included in this week’s boxes) for $5. 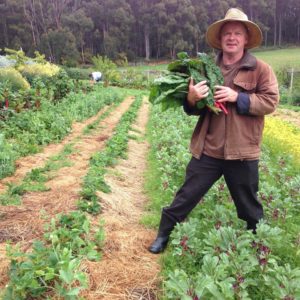 Mr & Mrs BB had a night away last weekend in Woodbridge, and dropped in to have a look at the Birch’s Bay Art Farm – which is on the same site as Diemen Pepper and Fleurty’s Cafe. Admiring the abundance of rhubarb in the garden out loud led to having a bit of a chat with the two lovely ladies working in the garden at the time – and as a result of the conversation, we’ve been able to include some of that lovely organically grown rhubarb in this week’s $35 boxes! The market garden aspect of the enterprise trades as Fivebob Farm, and we’re looking forward to getting more of their rhubarb and other goodies in future boxes too. This week’s organic boxes are also lucky enough to have a handful of tasty little kiwi-fruit from subscriber and home-grower Cathie – these furry fruit seem to actually grow quite well in our climate, which isn’t that surprising considering we import loads from New Zealand; hopefully some bright spark might come along and do for Tasmanian kiwi-fruit what the Bidwells at Avoland have done for Tasmanian avocados soon!

Loads of other goodies in this week’s boxes – delicious white-eye potatoes (similar to pink-eyes) from John, quinoa from Kindred Organics for $30 boxes, fragrant dill from Richmond Farm and Wombok from Dendra Market Gardens spring to mind – don’t forget to post your vegie box creations on our timeline, we love to see what you’re cooking! 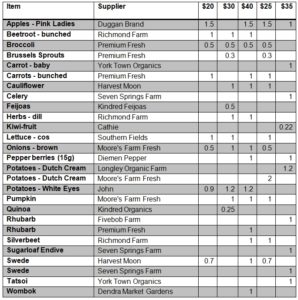