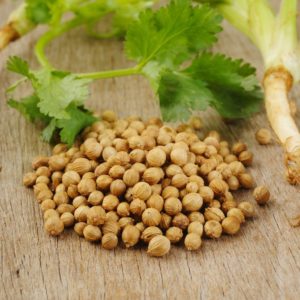 It’s been one of those weeks where the box we began planning on Sunday ended up being a very different box by Friday – which seems quite often to be the case at this transitional time between autumn and winter, although the challenges of filling a box with local produce at this time of the year pale into insignificance when compared with the transition between winter and spring. Curiously, as plan A became plan B and then plan C and so on, the different box types began to mirror each other, despite the large number of different growers, in different locations and growing on very different scales.

All boxes this week (apart from the $25 box in which we don’t include herbs) feature coriander, which despite its reputation as being a garnish in Asian restaurants, is grown widely all the way from Europe to Asia, and is actually one of the gifts that the old world gave to the new – imagine Mexican food without coriander! Coriander has a habit of bolting to seed in hot weather (as any home herb grower knows) – which is a downer if you want the leaves, stems and roots (which are ALL full of delicious flavour!), but not so bad if you want to harvest the seeds (which are also full of delicious flavour!). 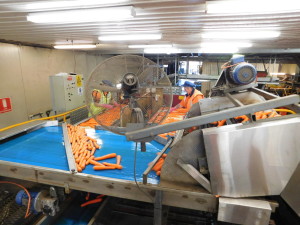 All boxes this week (except most of the $20 boxes) also feature carrots, though in various guises – from baby carrots in the organic boxes, to stubby Chantenay carrots (perfect for steaming or braising whole) in the $30 and $40 boxes, to juicing carrots in the $25 boxes. Commercially grown carrots go through an intensive grading process – those that meet supermarket specs are sorted by size, and those that don’t (broken, split, misshapen or too big) are sold cheap as “juicing” carrots, despite being perfectly ok for all types of application. The $25 boxes also contain a generous quantity of saucing tomatoes – tomatoes that work loose from the truss, or are a bit over-ripe, or undersize; we offer both juicing carrots and saucing tomatoes as bulk purchase offers, but if you’d like some tomatoes to put away for the winter you’ll need to get in quick!

Parsnips and kennebec potatoes are also a common thread this week, as is ruby chard – both Richmond Farm and Bream Creek Community Market Garden have supplied delicious, tender young chard, which should be delicious right down to the stem. Feioas also continue to be a seasonal treat, and Mark & Christine have supplied a quarter of a tonne of certified organic golden delicious apples for everyone to enjoy! 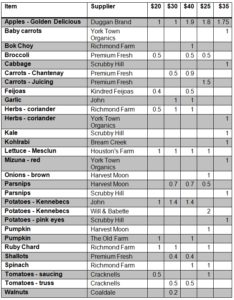