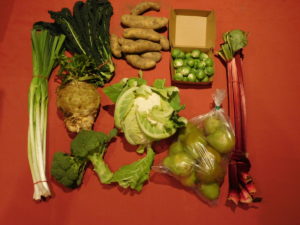 After a very poor year for fingerling potatoes last year, John has a few varieties for you to try this year – this week’s potato is the very evocatively named “Russian Banana”, which according to the internet was cultivated in the Baltic regions, before being introduced to the U.S. by Russian Sailors, although the Russian tag has been variously absent in the nomenclature depending upon the state of international relations… These long potatoes are best either cut into wedges lengthways and roasted, or boiled whole for salads (after boiling they can be cut into bite-sized pieces of your choice of shape), and have enough flavour to

be a star in their own right! We’re also pleased to have been able to secure enough rhubarb (100 bunches in total!) to be able to include these in the $30 boxes – rhubarb is surprisingly hard to get hold of in quantity! – along with some very nice Brussels sprouts and broccoli, all from Premium Fresh.

This week’s “spring dew” pears are from O & E Hansen and Son in Nubeena – sadly due to lack of supermarket demand Scott will be removing much of the stock of this variety, which we think is a bit of a pity as they’re a lovely pear. Celeriac is also back, and Richmond Farm were able to supply enough leeks this week for everyone to get a bunch!

Organic boxes will enjoy Packham pears from Mark & Christine, along with a wonderful array of fresh goodies from Alex at Golden Valley Farm, including the first broccoli for the season; Grown for Taste have also supplied spinach and Hontsai (a versatile Asian green) for the organic boxes along with some other lines for the standard boxes. 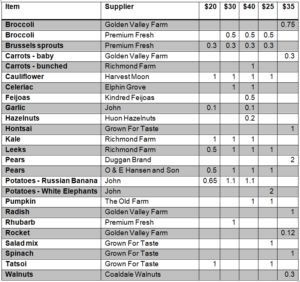