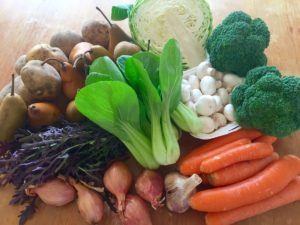 It’s beginning to look a lot like winter… the cold is really starting to set in, the days are getting short, and the change of season is really starting to show in terms of what produce is locally available. With the exception of the tomatoes in this week’s $40 boxes – which despite being grown in a climate-controlled environment are generally smaller as the season begins to wind up – most of what’s in this week’s box is either things that have grown in the summer and store well over the winter (garlic, onions, shallots, pears, pumpkin, potatoes and grains) or things that don’t mind a bit of colder weather (cabbage, beetroot, broccoli, silverbeet). 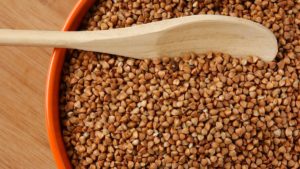 The cultivation of grains in particular is one of the main technological leaps that enabled humans to stop being nomadic and settle down in one place to ride out the seasons. What constitutes a grain is a slightly less clear picture, however, but what we generally consider grains are carbohydrate rich seeds that can be dried, stored, made into flours or cooked into belly-filling porridge-type dishes. This week’s $40 boxes include certified organic buckwheat from Kindred Organics, which is commonly used in flour form to make noodles in parts of Asia, but in Eastern Europe the “groats” are often used to make porridge. Buckwheat – which has the advantageous ability to grow in poor soil – looks like a grain, tastes like a grain, but is actually more closely related to rhubarb than the grasses that classify as true grains. For those with food intolerances or Coealiac disease, buckwheat is also – unlike other low gluten grains like spelt – completely free of gluten. (If you’re a fan of buckwheat and spelt flour, don’t forget you can also order these as optional box add-ons, also sourced from Kindred Organics!) 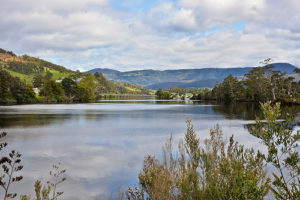 This week’s box also has a strong Huon Valley element – delicious organic Beurre Bosc pears from the Duggans; mixed Asian mushrooms from Cygnet Mushroom Farm; loads of organically grown goodies from Golden Valley Farm and Scrubby Hill Farm; and in addition to two different potato varieties from John – who’s going to visit his 90 year-old aunt in Victoria this week, something you’ve all helped pay for! – $30 boxes also get his delicious spray-free garlic. It’s not quite as pretty down there at this time of the year as it is when spring and summer are in full bloom, but doing my rounds on Wednesday reminded me of how lovely the bracing, crisp air and autumnal scenery really is. 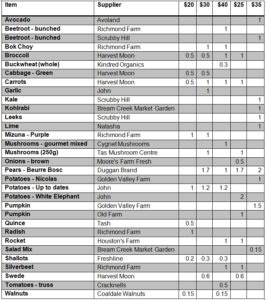