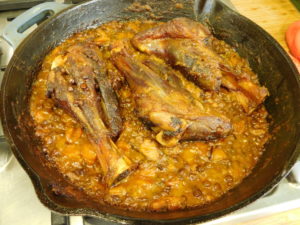 Brown three lamb shanks in a little olive oil in a skillet or heavy, oven-proof frying pan or casserole. Remove, and cook two sliced onions in the olive oil (and rendered lamb fat) until browning. Add a few cloves of chopped garlic, and two large roughly diced carrots. Cook the edge off the raw garlic, then add about a cup of green lentils, combine well, then add a tbsp of ground ginger and a half tbsp of turmeric. Cook for another thirty seconds or so, making sure the spices don’t stick, then add a tbsp or two (or more, if you dare) of harissa paste*. Cook this out for another ten or twenty seconds, then deglaze with about four cups of water (from the kettle is a good way of maintaining the heat at this point). Cover, and cook for about four or five hours in a low oven (100C). Alternatively, transfer to a slow cooker and cook on low for about 8 hours. The liquid may not cover the lamb shanks; if so, turn them occasionally. (I only turned them once – there’s not much opportunity for them to dry out at such a low temperature).

For the pilaf – add a cauliflower chopped into fairly small pieces to basmati rice and water, using absorption method (2 cups rice, three cups water) and cook as normal. (I used a rice cooker to look after this – check your rice cooker can do things other than rice before trying this though!) Meanwhile, fry another onion in plenty of butter (and a little olive oil to stop the butter from burning) until soft, then add a small handful each of chopped dried apricots, dates and any other dried fruit you fancy, along with about half a tbsp of mixed spice (the kind you use in cakes – alternatively, use freshly ground cinnamon, cloves and nutmeg). Stir this into the cooking rice and cauliflower and stir well (or if you prefer, add it at the end). 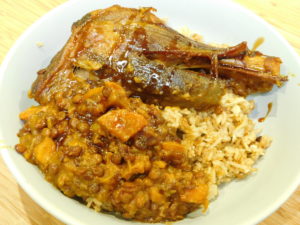 To serve – stir some finely sliced preserved lemon through the pilaf, top with a shank, loosen up the lentils with some water over heat if required (and season to taste) before adding to the plate, then drizzle over some pomegranate molasses.

*Harissa is a middle-eastern chilli paste – recipes vary, but a simple and delicious version can be made by grinding cumin, caraway, fresh or dried chilli and garlic with some olive oil, lemon juice and salt. The lemon juice and salt can also be replaced with the brine from preserved lemons.