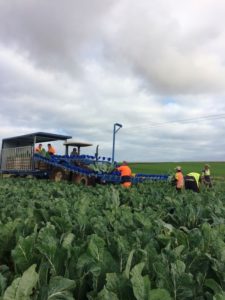 If you’ve been to a supermarket in the last month or so, you may have noticed that the price of cauliflowers was starting to rival the price of saffron. In this instance, this isn’t simply price gouging by retailers – demand for cauliflowers is always high (it’s one of Australia’s most popular vegetables – and one of our least often requested exclusions), and supply was chronically short, pushing up the market price. Interestingly, the reason for this goes back to last year, when poor weather in a number of parts of Australia (including Tasmania) resulted in later plantings, which then resulted in later harvests. With supply in other states being so low, and therefore prices being so high, a fair proportion of the crop in Tasmania was also being recruited to fill the gap, also increasing the demand by reducing the supply here. It’s hard to really grasp the scale of how much food is grown in this country every year to feed our – by global standards – relatively small population, but the fact that the great cauliflower shortage is now largely over and prices have floated back to somewhere near their old levels is a testament both to how significant our climate and weather are to our continued food security, and also to the extraordinary resilience of our national food supply chain. All that customers generally see of what’s a pretty catastrophic event for famers is that the price on a few items goes up for a period of time – perhaps if the supermarkets actually included photos of the conditions that led to the shortage above the price tag, not so many people would complain 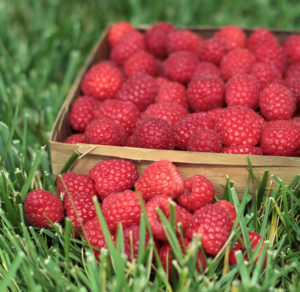 about something that’s taken for granted so much of the time. The long and short of it is, we’ve got some bloomin’ lovely, fresh cauliflowers from Harvest Moon for you this week, after a few weeks of them being well outside of the scope for our budget. Hooray!

This week sees the end of our $10 fruit supplement for 2017, and to celebrate we’ve sourced two routine favourites – golden delicious apples, and remarkably for this time of year, locally grown raspberries from Smartberries in Forth (modern growing techniques have some definite benefits!) We’re also continuing with the strawberry bonanza with all $20, $25, $30 AND $40 boxes getting delicious strawberries in varying amounts from DM Jennings in Cygnet. Speaking of “fruit”, we’ve also got cherry tomatoes from Brandsema across the board, and also delicious avocados for the $40s and organics – we try to include these as often as we can but as an in demand premium local product they’re a bit difficult to find room in the budget for. If you’d like to order extra avocados at any time over the next month (which is roughly how much longer the season will go for) please let us know – they’re $16 per kilo, meaning the medium-sized ones in this week’s box will be roughly $3 each. 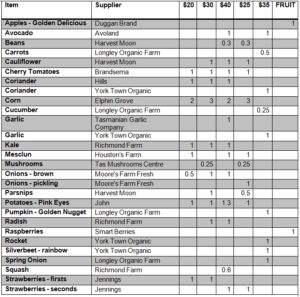