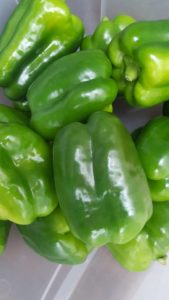 I was brought up using the word “capsicum” to describe those generally red, yellow and green things that aren’t “hot”, and chilli to describe the ones that are; but over the years I’ve started to like the word “peppers” to cover the whole genus, even though it’s a bit ambiguous as it also refers to the spice that once upon a time was worth more than gold. The reason for this is that peppers come in so many shapes, sizes, and heat levels (the latter determined by the amount of capsaicin in the fruit, which is measured in Scoville Heat Units), more and more of which are reasonably frequently available, that it’s more helpful generally to think of them as part of a 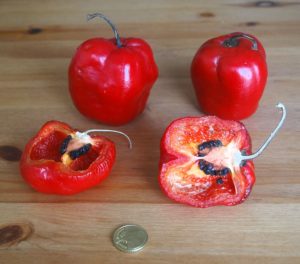 continuum rather than arbitrarily splitting them into two subgroups. (Actually, science splits the culinary varieties into five species.) The capsicum genus, like many vegetables we take for granted now, comes from the Americas; unsurprisingly most species like hot climates, which is why they’re ideally suited to the hydroponic hot-house techniques used by Tassie Pride, whose capsicum (a.k.a. bell peppers) feature regularly in our boxes.

The green (mild) peppers included in the $40 boxes this week comes from Grown For Taste, who use a far less controlled growing environment for their fruit, which means that at the end of the season (which is fast approaching), some of the fruit will remain unripe, or green. The green peppers are not as sweet as the red and yellow ripe peppers but have a rich, meaty flavour and work very well in slow-cooked braises where they have time to soften in cooking. The hot peppers included in the $20, $40 and organic boxes this week are from an entirely different species within the capsicum family, and are generally known here Rocoto (although in Mexico they’re known as Manzano – or apple – peppers). They are pretty much as far removed from the other culinary species as is possible; they grow well in colder climates as long as they aren’t exposed to frost, and can live for up to fifteen years, making them ideal for home gardeners. This week’s 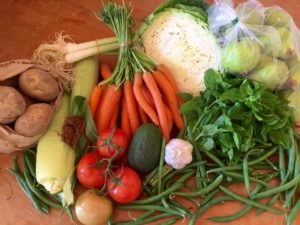 Rocotos are of two slightly different varieties (one of which is a more elongated shape), and both are from home-growers – Bruce from Bellerive, and Say from Sandy Bay. Rocotos, in my experience, are the Russian Roulette of chillies – their heat level can vary greatly – so it may be best to add a small amount to whatever you’re cooking and try before adding more; the seeds are also not really suited to eating, unlike the more commonly cultivated chilli varieties.

We’ve also got a bit of a pear bonanza happening this week – all boxes, including the organic boxes, have Packham pears, which are the first cab off the rank in the pear season. Pears don’t really ripen on the tree, so are picked when the sugars begin to develop and then ripened off the tree – if you prefer a softer pear, eat them later in the week, if you like plenty of crunch (or if you’re going to use them to make a coleslaw with the red onions and the cabbage in this week’s box) then get to them early or put them in the fridge. This also applies to the avocado (another welcome immigrant from the Americas), which is always picked green – if your avocado is green and hard, it’s actually a sign of freshness. However, you’ll definitely want to wait for them to darken and soften before eating them – leave them out on the bench, preferably with the pears which naturally release a gas that ripens other fruit. 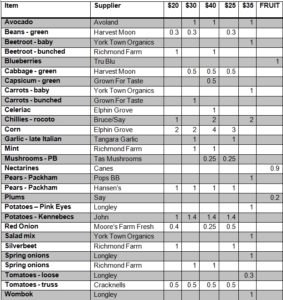