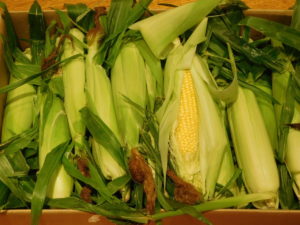 Corn – it’s fascinating stuff. Originally domesticated in Mexico some 9000 years ago, human intervention converted it from its original form as a grass with one tiny seed head per plant, to producing multiple oversized “cobs”, in the process rendering it incapable of reproducing without human intervention; on the face of it this seems a poor evolutionary strategy, but thanks to its high yields in varied conditions and susceptibility to human intervention in its genetic traits, it’s now the largest crop by far grown in the U.S., covering at least 80 million acres. It even leaves its chemical signature in those who eat it: as a “C4” plant, more highly evolved and better able to cope with dry conditions than its “C3” predecessors like wheat, barley, oats and rice, it contains a higher level of a particular isotope of carbon, meaning that you can actually analyse the tissue from animals (including humans) to determine whether corn is or isn’t a major part of their diet.  More importantly than all of the above, it’s extremely delicious, and we’re going to make the most of the short window of availability for Elphin Grove’s corn, grown in Sassafras, while we can! 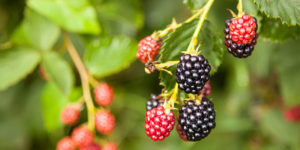 This week’s fruit supplement features some very pretty “White Princess” peaches from Canes Stonefruit – which will sadly probably be the last peaches for the season, partly due to yet more poor weather – and also some super-tasty wild blackberries. Picking – or perhaps scrumping – wild blackberries is a Tasmanian tradition around this time of the year, although not quite as much as it was, probably because buying blackberries from the shop doesn’t involve scratching pretty much every inch of your body. However, the wild varieties are pretty special – we’ve been able to get some hand-picked berries from Bernie in Lawitta, who picks them by arrangement from private farms (there’s unfortunately always a risk with road-side berries that they may have been sprayed.)

Richard from Banticks let us know late last week that unfortunately their chickens had responded to the season and begun their molt, which has meant they’re unable to supply any eggs for us at the moment – we’re hoping to have some supply back in a few weeks, but it may continue to be limited from then. The current consumer-driven demand for better standards of chicken welfare in egg production has been a great thing, but unfortunately it hasn’t always resulted in a greater awareness of the natural behaviour of chickens – chickens don’t lay eggs during winter normally as it would be bad for their health, and the health of their offspring, to do so; but consumer demand for eggs is greatest during their least productive season. Eggs can only be produced year round by hatching them so they come into maturity during the winter, or by tricking the chickens into thinking it’s egg-laying season by herding them into sheds before night-fall and keeping the lights on in the shed (the length of the days is how chickens know when it’s the right season to lay). We’ve been able to source eggs from Olsen’s eggs, who are free range but use the latter technique and have a much bigger flock, for this week’s boxes – this week’s eggs are actually the super-size eggs that are graded out because they don’t quite fit in the carton, which is why they’re in plain cartons. (They are, however, stamped, and have a best before date listed on the carton). We are grateful for your understanding whilst we work out the best strategy for supplying demand in a sustainable way over the season. 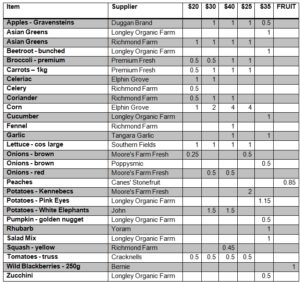