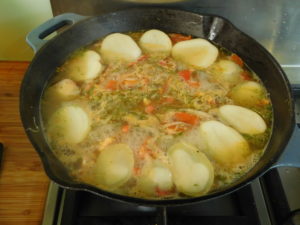 Thinly slice two brown onions; finely chop the stems from a bunch of dill and about a tbsp of capers; wash a kg of potatoes and cut into 5mm thick slices; roughly chop three or four tomatoes. In a skillet or ovenproof frypan soften the sliced onion in garlic oil and butter, add the dill and capers, combine well, then deglaze with a cup of white wine. 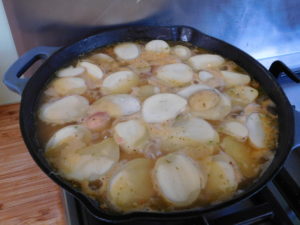 Season generously. Add a litre of fish stock, and the chopped tomatoes, and bring to the boil. Carefuly place the potatoes in the boiling stock, working clock-wise or anti-clockwise to ensure that the layers are even. When the potatoes are all in the pan, put the lid on and cook until the potatoes soften and the starch from the potatoes thickens the stock a bit, then place three small trout on top and cook in a 200C oven until the trout is cooked and the top layer of potato has dried a little and is starting to curl. Serve the fish on top of the potatoes, with fresh dill fronds on top. 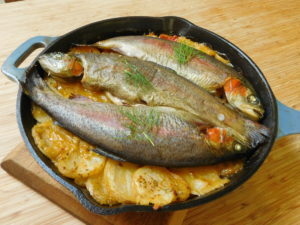