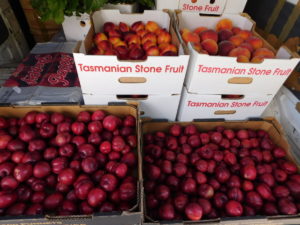 We’re always excited to include home-grown produce in our boxes, and when Robyn let us know her blood plum tree was ready to pick this week we jumped at the chance – this extraordinarily productive tree, located with its owner in Blackmans Bay, provided enough for us to take away an order of 45kg and still have plenty more fruit for family and friends to enjoy too! When Mrs BB went in to drop some BB redcurrant jelly to Green’s Quality Meats late last week, one of Paul’s employees took an interest in what we were doing and let us know that he had heaps of cumquats ready to go, some of which we’ve divvied out amongst the organic boxes this week and some will become marmalade early 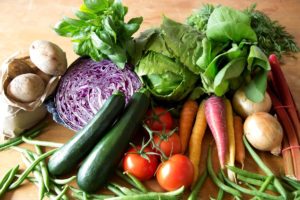 next week. If the fruit isn’t suitable for putting in the boxes, we can often still use it – long-time box subscriber Hannah also fixed up us with about 30kg of apricots a couple of weeks ago which were a bit soft but perfect for jamming, and earned herself a tidy little credit towards her February order in exchange!

This week’s box also sees the first Tassie red cabbages we’ve seen this year – they’re only snack-size at the moment but will certainly gain size over the season. Keeping with the scarlet theme both Longley Organic Farm and Premium Fresh have supplied beetroot for this week’s boxes, and in a first, we’ve been able to get our hands on 150 bunches of beautiful Tassie rhubarb without anything going wrong! (For some reason we’ve never had much luck with rhubarb, but hopefully this is the beginning of a new era…) There’s also giant greens (cos lettuce from Southern Fields and wombok from Longley Organic Farm), tasty tomatoes from Cracknells and Elato, and mushrooms for munching – and the sun is even shining too! 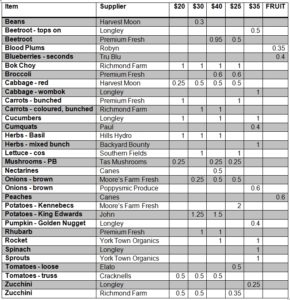