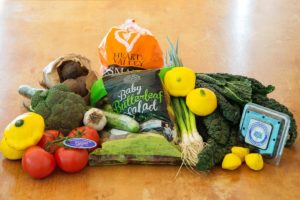 This week’s box features quite a few special treats that you’re unlikely to find at the local supermarket, and some wonderful colours too – whilst we’re now doing over two hundred boxes a week, we do our best to source interesting items and support smaller growers, and keep things interesting for you too!

Richmond farm have really pulled out the stops to supply over 50kg of yellow squash (sometimes known as patty-pan squash) from their new Campania farm, in a whole range of shapes and sizes! Squash is an incredibly ambiguous term when it comes to vegetables (many countries use it to refer to a whole range of what we’d call pumpkin), but in Australian English it’s a curcurbit with a soft, edible skin, shaped vaguely like a flying saucer but tasting and cooking more-or-less the same as zucchini. The large ones lend themselves well to stuffing due to their shape, but they’re also great for bringing a splash of colour to any dish that you’d usually use a standard zucchini in. 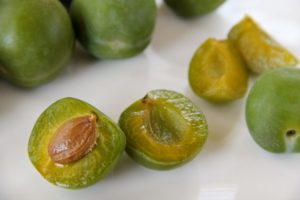 Coal Valley Orchard have just picked their greengage crop, and we were able to secure almost 90kg of this fruit of almost mythical status to share around those of you who have opted for the $10 seasonal fruit supplement. I can’t think of many other fruit that have such a ubiquitous ability to bring back fond summer childhood memories (especially amongst those who may have enjoyed quite a few 21st birthdays); they have an appealing tartness when just ripe, which builds to a sticky caramel-like sweetness after a few days on the bench. They make an excellent jam – or you could just eat them and buy some BB roasted greengage jam in winter when fruit is just a distant memory… Our regular egg suppliers, Jeremy & Richard from Banticks have also supplied us with just enough delicious plums for a taste, but next week we’re anticipating many more. 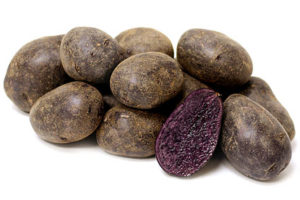 You may have noticed that this week’s potatoes are a bit different to the usual – John’s new season sapphire potatoes arrived this week! As the name suggests, these potatoes are a rich blue colour, outside (and a bit less but still quite blue on the inside) – they taste and cook similarly to the standard brown/yellow/white varieties, and actually make a mean chip!

We’ve also included a special garlic variety – Spanish roja – which, unsurprisingly, has a rich red coloured skin on the cloves beneath the white outer layer, grown organically in Acton by a new addition to the BB community, Tangara Garlic. And speaking of organically grown alliums, we’ve also been able to get a great little stash of beautiful onions from Linda and Trev at Poppysmic Produce – now we just need to lock in a supply of organically grown potatoes… working on it!