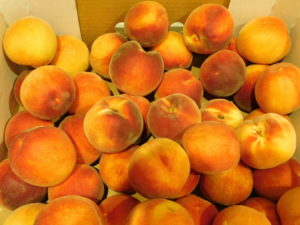 This week’s box sees the first of Canes Orchards’ Peaches for this year – and they’re beauties! David and Dianne grow a range of peach varieties, along with a multitude of other stonefruit, at their orchard between Huonville and Franklin in the Huon Valley, where Pops BB actually helped on the farm as a child (albeit under the previous generation of Canes). David is an expert at picking fruit at just the right moment – you’ll probably find that your peaches aren’t quite ready for eating yet, but give them a few days on the bench and they’ll ripen up to perfection. If you’d like to save them for later in the week, putting them in the fridge will slow this process down a bit. 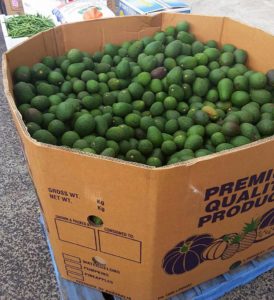 We normally try to include a fruit item in each week’s box – we’d planned to include David Jennings delicious Cygnet strawberries this week, which normally come up on the truck first thing Friday morning, freshly picked on Thursday. (We’ve renamed the Jennings’ truck the strawberry fairy in the BB household as we leave the empty trays out on our doorstep on Thursday night, and often when we wake up on Friday morning the trays become miraculously full of strawberries!) However, on Thursday afternoon we received some sad news – the tail end of the current crop was badly affected by wind-burn and wasn’t of a fit standard for sale. A quick scramble for ideas and we remembered that Paul & Maria had a bin of avocados coming down on the Harvest Moon truck destined for their local distributor – the Market Cart. Matt quickly fixed us up with an order of over 200 avocados this morning (which arrived in Glenorchy at 7:30 this morning) just in time to pack before packing the delivery vans at 8:30. It might not go in the fruit salad, but an avocado is definitely a fruit! 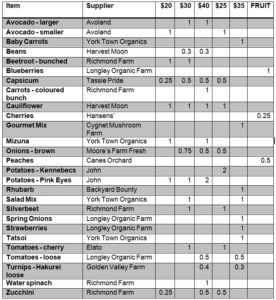