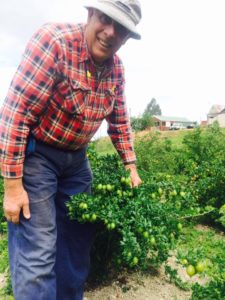 This week’s boxes feature an underappreciated berry – or should it be a currant, being closely related as it is to other tart fruit including blackcurrants and redcurrants? I have fond memories of sitting as a child under the gooseberry bush and gorging myself on these very sour little fruit, and I confess I may have eaten a few more of the gooseberries we ordered this week than I probably should have. If you’re not as hardy as me, green gooseberries are perfect for cooking – stewed with sugar, they make an excellent crumble base, and due to their high pectin content you can take it a bit further and turn them into a super jam (or you could just buy our Gold Medal winning Gooseberry & Elderflower jam, while stocks last…) We’ve sourced the gooseberries for this week’s boxes from two growers – Corey from Nichols Rivulet, and Wolfe’s Berry Farm, who are a bit of a local institution; berries have been grown at the farm since 1899!

A very different fruit makes its return this week too – that being the central-American import, the avocado. Paul & Maria picked the first crop of their Haas avocados at their North Motton property last year, and this year their crop is set to quadruple! We’re sure you won’t mind too much – their avocados are a far superior product to the avocados imported from interstate and overseas, grown without the chemicals needed when growing them in hot climates, and left on the tree for significantly longer to 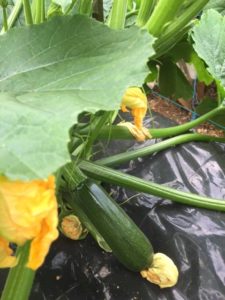 fully mature into a silky, creamy and very flavoursome fruit. By the way, yes, we know they’re rock hard – leave them out on the bench to soften for up to a week and they’ll be perfect! The Haas has a handy litmus test for ripeness – just watch the skin change from pale green to almost black and it’ll be perfect. Whatever you do, don’t put them in the fridge, as this can induce brown rot unless it’s done immediately after picking.

We’re also really pleased to be able to include three different items from Grown for Taste in this week’s boxes – it’s not just an idle boast, their veg really is grown from varieties carefully selected for flavour rather than looks or freightability. In addition to another helping of George’s famous salad mix, we’ve also been lucky enough to get the first of their zucchini and some crispy, super-sweet sugar-snap peas. 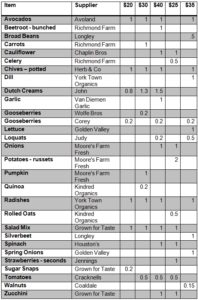