For the sticky pork…  Mix together a cup of apple juice, a half cup light soy sauce, two tbsp dark soy sauce, two tbsp maple syrup, two tsp chinese five spice, two cloves of crushed garlic, and a squirt each of tomato sauce and chilli sauce. Pour over pork chops arranged tightly in a baking tray, make a cartouche by covering with baking paper and sitting another baking tray on top to weight it down (this stops moisture evaporating and keeps the meat in contact with the marinade/cooking broth), then bake in a 120c oven for a few hours. Drain the liquid off the pork into a small saucepan, bring to the boil; meanwhile, make a slurry with a couple of tbsp of rice vinegar and potato flour (or cornflour). Stir the slurry in to thicken the sauce – it should thicken pretty much straight away – then remove from the heat. Taste, and add sugar to sweeten if required. Pour over the pork chops and return to a hot oven (200c) to glaze. (You may find you need to decant quite a bit of rendered fat from the finished sauce, which is easy enough to do as it separates out well, and it doesn’t really add any flavour.) Sprinkle the finished product with sesame seeds. 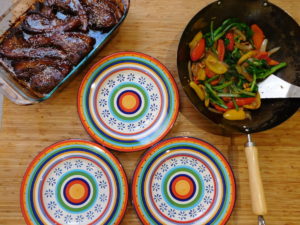 For the stir-fried veg – cut two onions into wedges; finely slice two cloves of garlic and a thumb-sized piece of ginger; cut the cheeks of a capsicum into halves; wash and remove the base from a bunch of choy sum; snap the woody ends off a bunch of asparagus and chop into halves. Into a hot, oiled wok, add the onions and a handful of cashews, cook til the onion starts to soften and brown, add the capsicum and asparagus. Stir-fry for a minute or two more, then add the choy sum, garlic and ginger. Continue to cook until the choy sum begins to wilt and the garlic and ginger begin to cook, then add a slosh of water, and continue to cook (steam) over high heat, stirring, until the water is evaporated – at which point the veg should be just about right.