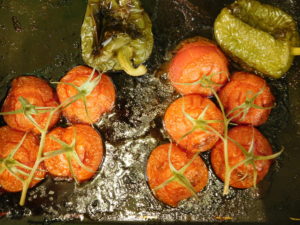 For the BBQ pork… Roast a truss of tomatoes and a couple of green peppers at 175C for about an hour. Grind a tbsp of cumin, about 5 allspice, a tsp yellow mustard, a tsp or so of dried thyme, two tsp of black pepper and either smoked paprika or chipotle to taste (depending on how much kick you want!) Combine the roasted peppers and tomatoes (minus the inedible bits) in a blender with the spices, a tbsp of vinegar, a tbsp molasses, a pinch of salt and about a tsp of sugar. Blend, pour over pork (I used some boneless chops, but ribs or straight chops would both be good, or even maybe shoulder.) Cook as slow as you dare in the sauce (I only had an hour or so, so I cooked at 150), turning regularly, to really bring the flavours together and make the meat tender, then bring the temperature up to 200+ at the end for about ten minutes or so to get some colour and reduce the sauce a bit.

For the collard greens… heat a heavy skillet on your hottest burner; cut two onions into chunky wedges and dice a couple of rashers of bacon. Cook the onion and bacon in chicken fat until the onion has plenty of colour (don’t sweat the onion, char it!), then add the chopped collard greens (or other leafies like silverbeet, kale, or even cabbage), toss in the pan juices, then deglaze with a little beer, add a bit of water and a pinch of salt, and cook over medium heat, covered (but with a vent for the steam to escape) til the greens are soft and have plenty of bacony flavour to them. Add more water as you go if the pan cooks to dry.