Bring about a litre of chicken stock to the boil. Snap woody ends of a bunch of asparagus; slice the stem thinly and reserve the spear end. Finely dice an onion, thinly slice a garlic shoot (peel the tough outer layer off first). Cut thick round of black pudding. Strip the leaves off a bunch of tarragon, and finely chop. 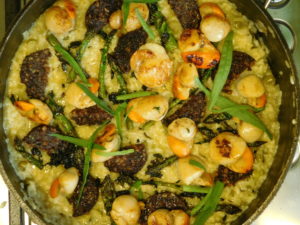 Saute onion and asparagus slices in olive oil, add the garlic, a little salt, some whole peppercorns and the rice. Continue to cook until the rice is lightly toasted, then add a cupful of white wine. Continually stirring, add stock as the rice begins to dry out. Add boiling water from the kettle instead when the stock runs out.

Meanwhile, fry the black pudding rounds in a very hot skillet – turn only twice to get a good crust on the outside. Set aside. Add butter to the same pan, and char the asparagus rounds (the butter will brown a bit, this is ok but don’t let it go too far!). Deglaze with a little more white wine and add the tarragon – when the white wine is pretty much absorbed, set this aside too and wipe out the skillet.

When the risotto is finished, stir through a generous amount of butter. Sear the scallops in the skillet, and arrange it over the risotto with the black pudding pieces and the asparagus spears, plus some extra tarragon fronds.