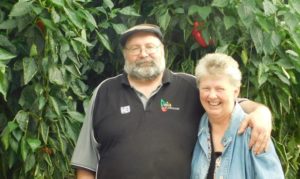 As the days warm and lengthen, we welcome more and more growers back into production; this week we’re excited to be able to include Tasmanian grown capsicum in your boxes again for the first time since April! Tassie Pride, the only large-scale capsicum producer in Tasmania and one of the largest of its kind in Australia, was initiated by the Joubert family as a response to hard economic times in the Devonport region, and employs many locals to pick the fruit (yes, capsicum is a fruit!), tend plants and generally maintain operations in the 3 hectare glasshouse. Literally five minutes up the road, Hills Transplants grow fresh herbs and greens in similarly vast scale in glass-houses looking out over Bass Strait; this week’s box also features their watercress and tarragon, a herb that is highly prized in traditional French cuisine, and is an essential ingredient in sauce béarnaise. Sauce béarnaise is the “child” of sauce hollandaise (both sauces are an emulsion of egg and butter), both of which go beautifully with blanched asparagus, such as the asparagus from Newry farm, also in this week’s box! (See what I did there…) 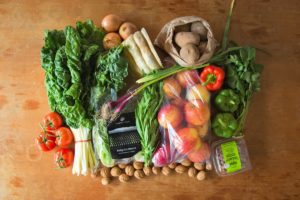 For a spicy kick, we’ve also included Pegasus Sprouts new Tasmanian Pepperberry flavoured sprouted chickpeas. Tasmanian Pepperberry is native to Tasmania, but rare amongst natives, is actually now being cultivated commercially by a small number of local growers; its fire is closer to the radish heat of wasabi or Szechuan pepper more than the smouldering burn of a chilli. We may even include some in future boxes for your culinary adventures! Organic boxes feature some delicious collard greens and spring garlic from Longley Organic Farm.

As the weather warms, we also say goodbye to some faithful winter providers; Martin from the Old Farm dropped the last load of his beautiful pumpkins to the warehouse this Thursday (but will be planting more for us next season!), our winter cache of Coaldale’s delicious walnuts is finally at an end, and dry garlic is also not long gone (although it’s hard to mourn when the mouth-watering aroma of fresh “wet” garlic is already upon us!) The omnivore’s dilemma – what to eat when you can eat everything – is, I feel, rendered slightly less difficult when we listen to the rhythm of the seasons, and ignore the siren-call of brightly-lit supermarket shelves offering goods imported from across the country and across the world. Distance makes the heart grow fonder (although proximity makes the community stronger), and I’m confident I’ll be seriously hankering for pumpkins come Autumn, just as the possibilities of sweet, juicy capsicum, in its cleverly extended local season, are calling me to the kitchen right now! 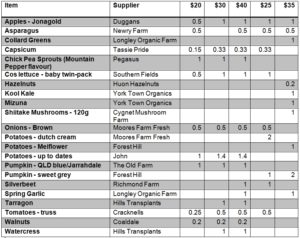