Mix ingredients for marinade – half a cup light soy, a slosh of dark soy, a third cup of Chinese cooking wine, about a tsp of five-spice (easy to make – just grind cinnamon, star anise, cloves, and include ground sechuan pepper and ginger, or add separately when using), a tbsp of raw sugar, and a tbsp of cornflour. Put in a cliplock bag with a half kilo of a coarse beef steak (I used round) sliced in stir fry strips, and allow to rest in the fridge for at least half a day. 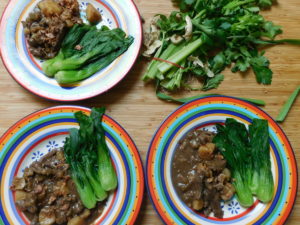 Slice half a celery, a generous knob of peeled ginger and one fresh garlic “stalk”. Peel, wash and dice about half a kilo of potatoes. Cook over low-medium heat in a cooking vessel suitable for moving from the hob to the oven (I used an earthenware tagine, which is as close as I could manage to a traditional Chinese claypot), then add the beef (minus the marinade) and brown slightly. Add the potatoes, about a cup or so of beef stock (careful with the salt content – if you only have bought beef stock, back off on the soy sauce in the marinade to compensate) and the marinade, and cook, covered, in a 150c oven for about three hours. Add sugar to taste if required (there should be a strong balance of sweet and salty), and serve with whole rinsed bok choy, blanched for about two minutes in rapidly boiling water, along with your favourite suitable Asian condiments (e.g. crispy shallots).