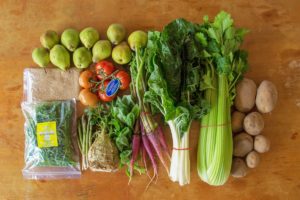 This week’s box sees the welcome return of tomatoes, a fruit (yes, not a vegetable) that is native to South America. The name comes from the Nahuatl word tomatl), and it belongs to the same family as the highly toxic deadly night-shade (a family which also includes other delicious items like potatoes, eggplants, capsicums and eggplants). A cool climate like Tasmania’s has a very short window for growing fruit and veg that require warm conditions to flourish – thankfully many of the edible members of the nightshade family are well-suited to growing hydroponically in heated glasshouses, a system whereby the plants roots are held within (generally) a rockwool substrate, which itself is placed within a system of pipes that circulate water that’s enriched with a carefully selected range of nutrients the plant needs for health and growth. Our climate is actually quite suitable to this method of growing also because the lack of a very hot summer enables greater control of temperature, reducing the risk of heat damage to the plant, and extending the period that the plants can be conned into believing it’s summer for almost half the calendar year!

The tomatoes in this week’s boxes come from the Cracknell’s farm in Granton – it’s actually remarkably hard to spot from the road considering that the glasshouse is 4000 square metres! – and this week marks their first week picking for this season, but there’s lots of work that goes into preparing for the first pick, going all the way back to removing the previous plants at the very end of last season in July. Nick and Sue started growing tomatoes in 1980, and son Matt and his wife Katie have taken over the business that now supplies many tonnes of vine ripened tomatoes to Woolworths, along with other smaller buyers. (In fact, you can even pick up their tomatoes from an old-fashioned honesty box at the driveway to the farm, despite the hi-tech 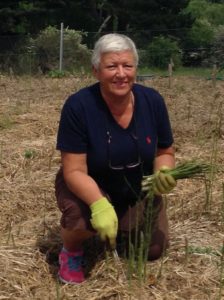 operation that produces them!) The basil that combines with the tomatoes to make this week’s box so deliciously aromatic comes from another hydroponic grower in the North of the state – Hills transplants – and we’re also looking forward to goodies from Brandsema, Tamar Valley Hydroponics and Tassie Pride in the coming weeks.

Our organic boxes this week have some special treats too – Newry farm have sent us down the first of their organically grown asparagus for the season from Longford, and we welcome Seven Springs Farm on board, who have supplied 80 certified organic baby fennel!

Here’s what’s in this week’s boxes: 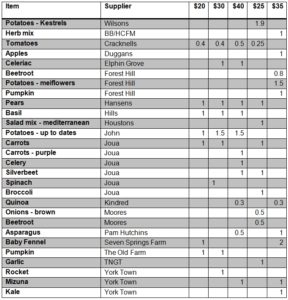