Haggis is commonly served with “neeps and tatties” – which is Scots for swedes (which are also called rutabaga in various places) and potatoes. Haggis is normally made from sheep offal, oats and spices, stuffed into a sheep’s stomach and boiled, but here I’ve instead shaped beef mince into a covered bread tin to effectively steam. The neeps and tatties are traditionally both mashed, but I’ve also taken the liberty of replacing the mashed potatoes with chips, for an extra textural dimension, and because chips are arguably the national dish of modern Scotland. 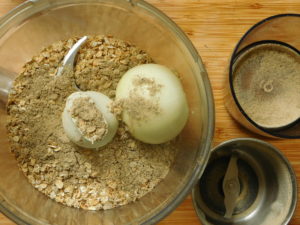 For the “haggis” meatloaf: Spread a cup of oats over a baking pan, and roast at 200 until the oats begin to crisp slightly and brown a little. Meanwhile, grind a half tbsp each of rock salt and black pepper, plus a tsp each of coriander and mace, in spice-grinder or similar. Combine the oats and spice mix with an onion (peeled and non edible-parts removed) and blitz to a rough paste, then add an egg and 500g beef mince, and combine well. Shape into a greased and paper lined baking tin, tuck the paper back over the top, and cover firmly with foil. Bake at 125C for a couple of hours, then rest. Cut into slices (a serrated bread-knife is best), then fry in plenty of butter (add a little vegetable oil to avoid excessive browning of the butter) until browned and a little crispy on the outside. Mop up the excess fat with paper towel.

For the “neeps”: boil a few roughly chopped and peeled swede until soft, drain, and mash with plenty of butter. Season to taste. 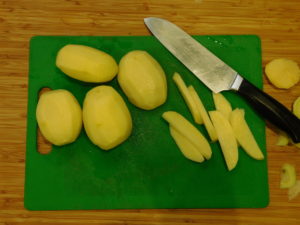 For the “tatties”: peel and wash around four potatoes, then cut in half lengthways to create two flat-sided halves that are the width of the chips you’d like. Then simply cut cross-wise into slices about half the width of a finger. Heat about a fingernail’s depth of a neutral oil with a high smoke-point (rice bran works well) in a roasting pan in a 250C oven, then add the cut chips in one layer. Let the chips form a solid crust before turning for even browning. When done, remove with a slotted spoon and toss in a metal bowl with some paper towel, then remove the saturated towel and toss again with salt. 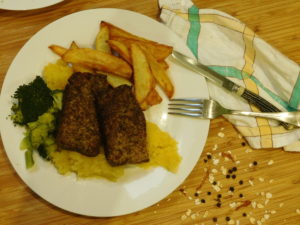 To serve: arrange “haggis” on “neeps” with “tatties” on the side! (Broccoli, as pictured, adds a nice element of colour and also adds some lightness to the dish, although swede prepared like this is deliciously light, sweet and fluffy!)