Prawns: in a food processor, combine two peeled shallots, a few cloves of garlic, a red chilli, the stems of a bunch of coriander and a stalk of lemongrass, and blitz til a rough paste (not a puree). Add a few tbsps of fish sauce, a little lime juice and a tsp of sugar (preferably a less refined sugar, such as raw), and allow around 300g of prawns to steep in the mixture for at least an hour. 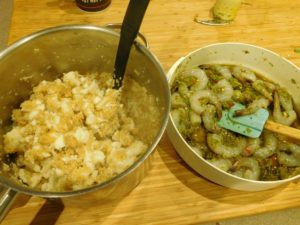 Quinoa: meanwhile, cut a cauliflower into small pieces (I quartered the larger florets). Rinse about a cupful of quinoa (I do this under the tap in a sieve) until the naturally occurring soapy residue stops lathering, and add to a pot with the cauliflower; cover to about twice the depth with hot water and boil until the cauliflower is soft to the point of a knife and the quinoa splits. (Quinoa splits when it’s cooked as the inside bursts out of the outer shell.) Drain well, stir through a drizzle of sesame oil, some fish sauce and some lime juice to season.

Stir-fry: Add oil to a hot wok, and quickly stir-fry the prawns with about a half cup of toasted cashews, reserving most of the marinade. When the prawns are the best part of cooked, add the marinade and a few tbsps of oyster sauce, and when the mixture is thick and bubbly, add the 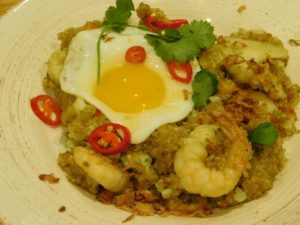 quinoa mix and stir-fry for a couple of minutes until everything is well combined and the flavours are absorbed.

Serve with a fried egg, crispy fried shallots (these are available pre-made), and some additional chopped chili and the leaves from the coriander.