The past three weeks have seen a steady increase in numbers – 243, 245, 247 – edging ever closer to the round figure of 250; organising orders, sourcing produce, packing and delivering with that many boxes is a big job, and we rely on some pretty special people each week to make it happen. One of those people doesn’t grow anything, but without his work each week things would grind to a halt pretty quickly! 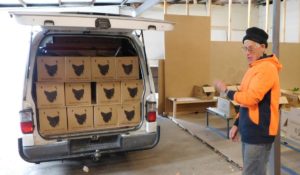 Pops BB – or Max as his birth certificate would have it – delivers just shy of 100 boxes in around 8 hours with only a few decimal points off 100% accuracy every week, which up until this week has represented over half of the total number of deliveries. Not bad for a 65 year-old builder with no previous in delivery work… so when he popped into the warehouse (he uses one end, we use the other) on Thursday afternoon with a limp and mumbled something about having fallen off a ladder, things escalated pretty quickly from being alert to being alarmed! Despite having multiple stitches in his left knee, Pops soldiered on today with the help of friend Paula at the wheel to make sure all the southern deliveries were done with only very minor delays. We hope that when he gets home he’ll be able to enjoy a “knees up” kind of weekend, and 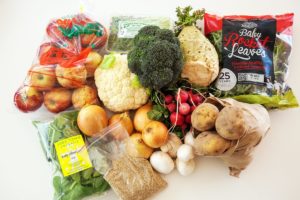 that his well-used skin is able to heal up without too much ongoing pain and suffering! (We suspect that Max may have just agreed to do the run today despite his injuries because he’s actually quite fond of his regulars…)

Probably should write something about vegetables here too huh…  This week’s box has lovely pea sprouts from Pegasus sprouts – Michael mentioned this week that he’s hoping to have his bean-sprout “cabinet” up and running soon, which would be pretty exciting, just in time for Laksa season! We’re also really pleased to have been able to source some especially local cauliflower this week (from Southern Fields in Forcett), and it’s great to have Richmond Farm’s radishes and bok choy back. If you’re new to the boxes, the knobbly looking thing in your box is an Elphin Grove celeriac – it’s nowhere near as scary as it looks, and we’ll definitely be posting some recipes to help you along the way during the week (partly as we’ve got quite a few left over from packing!).

Here’s the run down: 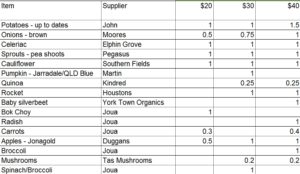