To about a litre of good chicken stock, add some sliced ginger (no need to peel), a few star anise, the stems of a punnet of shiitake, and a roughly chopped leek. Boil (lid on) until the additions have lost most of their flavour to the broth, then strain, and season with soy sauce and black vinegar. (The broth should be flavoursome – plenty of umami – with a strong sour note). 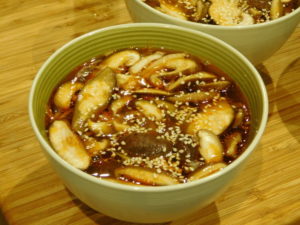 Meanwhile, use a v-slicer or similar to julienne a peeled turnip; also, finely slice the caps of the shiitake. When the broth is prepared (see steps above) add the shiitake slices to the broth and cook until softened. Arrange turnip “noodles” in the bowls (raw) with some frozen corn if you wish, then ladle over the broth, making sure to fairly ration out the shiitake. Allow to sit for five minutes for the turnip to blanch and the soup to cool to a comfortable eating temperature, season with sesame and chilli oil, and enjoy!