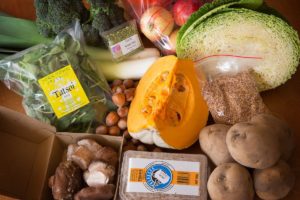 This week’s box is probably the winter-est box ever! Leeks, turnips, cabbages, potatoes, grains and nuts were all winter staples before the common use of refrigerated transport that flattened out seasons; in fact, that sounds like a great recipe for a soup… Turnips are a real winter specialist, and can end up being quite unpalatable if grown in warmer conditions. Whilst they have a reputation as being cattle fodder or peasant food, they’re actually very well connected: most Asian greens (Chinese cabbage, bok choy and mustard greens) are actually forms of turnip that don’t put down large storage roots, and the more commonly eaten swede (or rutabaga as it’s commonly known in North America) is actually, believe it or not, a cross between the cabbage and the turnip that originated in Scandinavia. Unsurprisingly, considering this noble lineage, they have bitter and mustardy elements to their flavour, which is probably why many cultures generously salt turnips in traditional preparations, as the salt counteracts the bitter flavours whilst enhancing the peppery ones. 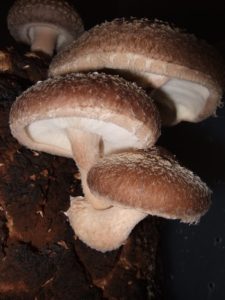 We’ve also been lucky to get an order of shiitake mushrooms (190 punnets!) from the Cygnet Mushroom Farm. These super-meaty mushrooms have Japanese origins – the name comes from the Japanese for the tree they naturally grow on (shii) and mushroom (take), so technically referring to them as shiitake mushrooms is a tautology. Dried shiitake are prized as much as, if not more than, fresh in Asian cultures, as it brings out their savoury notes, so if you want to hang on to them a bit longer why not try drying them out!

Here’s the full run-down of what’s in the box*: 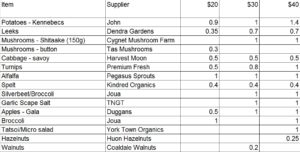