Paradoxically, as the days begin to lengthen following the winter solstice, the weather continues to grow colder for a time, and staying inside by the fire (or non wood-based alternative heat source) becomes even more attractive an option. Spare a thought, then for the poor lowly vegetable, living out in the wet and cold, that generally doesn’t have that option! 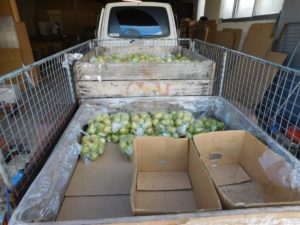 As we approach the month of August, we’re really into the Tassie winter, and plants, just like animals, don’t really respond particularly well to cold weather. Eating seasonally at this time of year is really about making the most of vegetables that grow in summer, mature in autumn, and are generally harvested in autumn or winter. Pumpkins, unlike their summer cousin zucchini, are best left to “ripen” in the sun for a while in autumn before being carefully stored for eating over the winter, and freshly dug potatoes become a rare thing. Onion and garlic will store well if dried correctly, and a similar process allows nuts to store well for months at a time, very useful during the lean season. Carrots, which live on shop shelves all year long, also come to the end of their local commercial season around this time of the year. One of the few things that actually 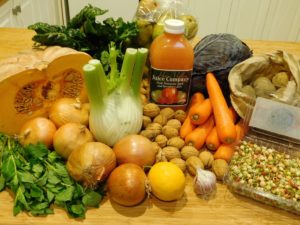 enjoy the cold are the brassica family, so it’s a great time of year to enjoy cabbages, cauliflowers and kale, and lemon, which generally flushes with fruit at this time, really brings out the flavour of leafy greens like kale.

This week’s box contains a very wintery selection, with some beautiful pears in a lucky-dip mix of varieties (Winter Cole, Spring Dew and Packham) from Hansens Orchard in Nubeena, and a delicious foretaste of spring in Huon Valley Juice’s apple and strawberry juice, made using a glut of David Jenning’s strawberry seconds caused by a patch of inclement weather during this year’s season, along with Mark & Christine’s beautiful apples. We’ve also got a few plants lucky enough to have found shelter indoors in the wintery weather – stir-fry sprouts from Pegasus and a lucky-dip of some not very wintery herbs from Hills Transplants in Devonport.

Here’s the full run down: 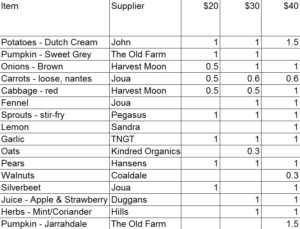