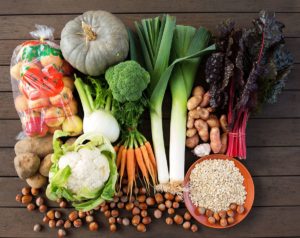 This week’s box features yet another New Zealand interloper – the kiwi fruit! This fruit grows in the wild in China – hence its original Western name “Chinese Gooseberry” – but commercial cultivation in New Zealand in the early twentieth century came with a new name for marketing purposes, and the mass export of the fruit resulted in the name sticking. The small kiwis in this week’s box come from Emma in Bonnet Hill, who teaches at the same school as Mrs BB (we find so many home-growers through these sorts of channels!). Emma has an “eco-house” on land belonging to her parents, and as her parents grew kiwis when they were growing up, she developed a taste for them and has planted her own (amongst other things) in her own edible garden.

All $30 boxes also include quinoa from Kindred Organics – this edible seed gets a bad wrap for being a hipster staple, but is a great locally grown alternative to rice, and is a rich source of protein, dietary fibre and carbohydrates. Lauran and Henriette run their farm on organic principles, and quinoa has a naturally occurring secret weapon against pests: the saponins that coat the seeds. These compounds have an unpleasantly bitter flavour, but can be removed by washing; the simplest way to do this is to rinse the quinoa in a sieve under the tap, giving it a bit of a stir as you do so, until it stops frothing. $40 boxes have a hearty porridge-sized portion of certified organic rolled oats, also from Kindred Organics, along with a small bag of our potato man John’s very small 2016 crop of Pink Fir Apple potatoes – perfect for boiling (the opposite of the up to date potatoes also in this week’s box which are perfect for roasting!)

Here’s the full run down of what’s in this week’s box: 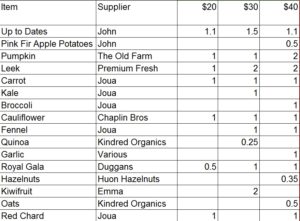