*This recipe was really largely a throw-it-all-in affair, so feel free to vary as required, or based on availability!

Preparation: Soak about half a litre of dried beans of your choice for at least 12 hours (I used a mix of haricot, lima and black eyed beans.) Top & tail, then peel, about 8 small shallots. Smash and peel (smashing facilitates removing the skins) a whole head of garlic. Slice some streaky bacon and a few large mushrooms. Finally – remove the skin and excess fat from a whole shoulder of pork, then cut into generous chunks.

Cooking: Heat a heavy-based pan or skillet, then render the fat from the pieces of skin to cook the pork meat in (or just use olive oil or lard). Cook the meat in batches; avoid moving it around too much to develop a browned crust on all sides. Move to a cast-iron casserole dish (large!) as cooked. (You can also put the soaked beans, minus the soaking water, in the dish at this stage if you like, along with the carrots which can go in whole).

When the meat is all browned, add the shallots, and use a similar technique to get some charred bits on them, before also adding to the casserole pot. Then add the bacon, render some fat off, and add the mushrooms and garlic to cook. Deglaze with a good wine-glass full of red wine, cook off the raw alcohol flavours, then add to the casserole pot, along with about half a litre of good stock (I used some home-made pheasant stock) and about a litre of extra water (for the beans to drink). I also added various dried herbs from the kitchen window – sage, rosemary, thyme – and about a tsp each of pinch of fennel seeds and peppercorns. 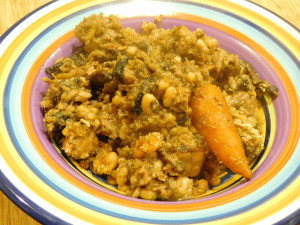 Cook at low heat (100c) in the oven for three hours or more, with the lid on, then remove the lid and raise the heat to around 150 for another hour or two, stirring reasonably often to avoid the top layer browning excessively at any point.

Season to taste, stir through a cornflour slurry (if you prefer a stew you can stand your spoon up in!), cover with a thick layer of home-made breadcrumbs, and cook at about 200c until the crumbs are golden and the stew bubbles up through. Allow to cool before serving to avoid third degree burns!