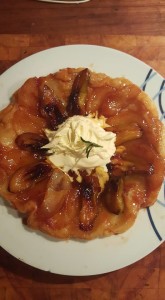 Peel and cut about 5 feijoas lengthways, and peeled and cut two smaller apples into thick slices, then cut a circle of a puff pastry sheet out just a tiny bit bigger than my fry pan.

Next I put about a third of a cup of sugar in the fry pan with about the same quantity of butter. I melted these together on med high heat then added the fruit, arranging them in the pan so they looked somewhat aesthetically pleasing (rather than just chucking them in any old way). The feijoa should also be placed in with the cut side down.

Prick the pastry with a fork a few times and put whole thing in a moderate hot oven for about 20 mins until pastry is golden and crisp.

Let cool on bench top for a few mins them scrape around edges with a knife. Put a plate on top of pan and quickly invert entire thing so the fruit is on top.

Put a big dollop of Meander Valley double cream in centre and start to salivate as it oozes over the hot tarte.

(This recipe was uploaded with the permission of the original poster.)