Firstly, make the butterscotch sauce: 200g brown sugar, 1/4 cup each of heavy cream and creme fraiche and 125g butter. Add everything to the pan and cook down over a med heat till the sugar is melted and mixture bubbly. Add 3 tablespoons of rum and a teaspoon of salt, cook for 5mins over a lower heat. Pour into jug, keeping warm. 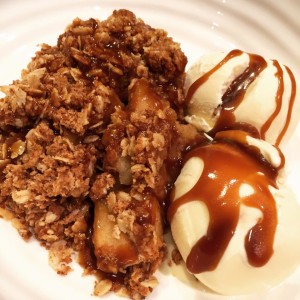 Chop up 6 apples and cook down with some brown sugar, cinnamon, star anise and cloves. Once cooked down add 4 feijoas cut up with skin removed. Remove star anise and cloves and put mixture into oven dish. For crumble mix put equal parts oats and plain flour into bowl. Add cinnamon, brown sugar and enough butter to get the mixture crumbly. (I poured a bit of the sauce over the fruit before sprinkling the crumble mixture over.)
Bake for 15-20mins at 180 degrees. Serve with vanilla icecream and liberal amounts of the rum butterscotch sauce.

(This recipe was uploaded with the permission of the original poster.)